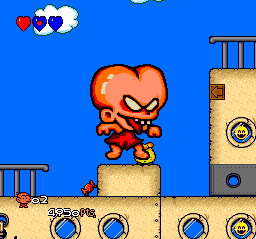 It’s always sad to see a mascot fall from grace.  Like Hollywood movie stars the trip to the bottom is usually a painful process, with few bowing out of the spotlight gracefully.  While the Crash Bandicoot games never degenerated to the level of repetition of the later Mega Man games he never reached the height of popularity he had when Naughty Dog were behind the wheel.  Volumes of text can be written about Sega’s mishandling of Sonic post 16-bit era but there is one other mascot who disappeared without a trace; Bonk, who sadly went out on a low note with Bonk’s Big Adventure.

The evil King Drool has returned to terrorize Dinosaur Kingdom once again and the only one who can stop him is Bonk.  This time around he doesn’t have to go it alone as the game now sports multiplayer.  Let’s ignore the fact that the games have never shown any other cavemen aside from Bonk and just say he’s a clone shall we?

After the amazing Bonk’s Revenge Hudson Soft/Red had no need to reinvent the wheel in terms of the series gameplay.  The host of improvements that game brought made the games finally feel “whole”.  In spite of that the developers did very little to separate Bonk’s Big Adventure from its predecessor with its few gameplay additions not amounting to much.  Bonk 3 simply feels like a rehash on more than one level, leaving little reason to play it after the prior two games.

Your primary weapon is still your massive melon, able to smash bad guys and bricks alike.  All of the moves present in Bonk’s Revenge make a return, meaning you can wall jump and use your teeth to climb walls.  Those familiar with the series will be able to jump in immediately due to this.  I feel the controls are loose and not as tight as Bonk’s Revenge but that might be my imagination.

The big additions to the game are two candies that will turn Bonk giant size or shrunk down to the size of an ant.  As giant Bonk you occupy a large portion of the screen, making it easier to bash enemies and trivialize some of the platforming segments.  Little Bonk sees the most use as there are tons of small pathways only he can navigate.  Taking a hit or eating the opposite size candy will return you to your normal height when necessary.

The last major additions this time out is 2-player coop.  With two players butting heads the game definitely becomes a lot easier than it already is.  The coop element is handled surprisingly well.  If one Bonk is giant size the other can stand on his head for elevation and if both players are separated pressing select will bring them together with a slight penalty.

Unfortunately the game doesn’t make the most of its new mechanics.  There’s rarely any need to go giant size and usually it’s inconvenient as there are areas that he can’t pass through.  Little Bonk will net you tons of food and meat but it can be frustrating encountering areas where you need to be normal and can’t readily change back right away.  These flaws are highlighted in the game’s weak level design.  Bonk 3 isn’t just similar to Bonk’s Revenge it recycles entire levels and graphical elements wholesale.

While Bonk’s Revenge was a technical step forward for the series in 1991 Bonk 3 is a step back.  In an effort to create different environments than the generic Dinosaur theme there are a number of set pieces that seem out of place in the game.  The modern day cities shouldn’t look too out of place considering you explored a mechanical ship in the second game but it ruins the prehistoric illusion.  I will say that the bosses are the game’s one highlight and outdo the second game in every way.  But overall the game feels as though it were created on a budget, prompting recycling of as many assets as possible.

In the end though it isn’t enough. Although Super Bonk was released the following year it was just as bad and outside of an ill-advised PS2/GameCube 3d makeover the series has gone dark.  The Bonk series deserved to go out with a bang not this sad whimper.