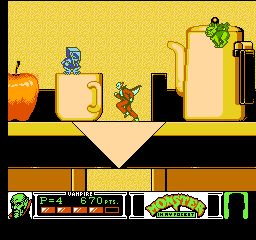 Long before Pokemon a different monster collecting craze swept the world:  Monster in my Pocket.  Oh you’ve never heard of them?  Truth be told neither had I at the time.  Not to make it sound as though I was in tune with all the hot trends of the early 90s but Monster in my Pocket had no recognition among my circle of friends, like pogs.   But for its time it was huge, spanning most media, including video games.  Capcom and Konami had a proven track record with licensed properties at this time and Monster in my Pocket represents Konami at the top of their game.

The Monster in my Pocket videogame released in 1991 followed the plot of the comic book miniseries, in which Warlock, the big bad of the MIMP universe sends a cadre of his henchman to the Miles home to destroy the good monsters, led by Vampire and (Frankenstein’s) Monster.  The journey will span a range of environments from the Miles home to a construction site before the final confrontation with Warlock.

The Monster in my Pocket franchise held many similarities to Pokemon, so many in fact that they unsuccessfully tried to sue Nintendo.  But you can’t really blame them.  The over 200 monsters were broken up into categories like Dinosaurs, Space Aliens, etc.  They were released in 11 series and graded on a scale of 1-30 in terms of rarity and value.  Remember the fist fights that occurred over Pokemon cards and such, many I personally witnessed between grown adults?  This was the precursor to that.  Although Pokemon has definitely stolen its thunder in some ways it left the door open for MIMP to come back as the property has seen another revival as late as 2006.

While the monsters spanned the typical genre conventions such as Werewolves, Vampires, skeletons and such they were not afraid to draw from mythology as well, with the likes of Baba Yaga, Kali, Hanuman (look it up) represented.  What this means is that the game had a gigantic well to draw from, which it does and makes full use of its license to create one of the better licensed video games for the NES, no small feat considering the competition.

The choice between the Vampire and the Monster is purely cosmetic.  I guess it makes two-player coop a lot simpler as they don’t have to balance the game around two different skill sets.  They both share the same powers, which consist of a double jump and a forward energy attack.  The energy attack flows in an arc and lingers in the air for a brief second, useful for taking out multiple enemies in a row or any flying bad ass that tries to swoop in for the attack.  Occasionally there are objects scattered around that you can pick up and throw; usually keys.  The cool thing is you can carry them into the boss fights, which makes some of these battles trivial.

Not that it’s even necessary.  MIMP is like Castlevania if Simon Belmont weren’t a gimp.   Thanks to the pitch perfect controls as well as the double jump the game is simply enjoyable from start to finish.  It’s perfectly balanced and features a linear difficulty curve but never descends to the cheap bullshit of the Castlevania games.  Health power-ups are spaced after every clump of enemies and in most cases you’ll need them.  That kind of tuning comes from years of experience; I guess the fan outrage over some of Castlevania’s more frustrating elements didn’t fall on deaf ears.

Thanks to the toy line the game has a large well of enemies to draw from, with new ones debuting on every stage.  The enemy variety and there ever changing attack patterns keep the game fresh at every level.  Speaking of stages, the level design is superb and makes excellent use of its premise of shrunken monsters in a world full of giants (from their perspective at least).  The environmental hazards such as flaming stove tops, bouncing balls of yarn and even sewage drains make clever use of everyday objects for gameplay purposes and only escalate as the game progresses.

Graphically Monster in my Pocket is a more mature version of Rescue Rangers, a game with a similar premise.  The character sprites are large and detailed and the enemies span the whole monster gamut, all in part because of the toy line.  The bosses feature some of the more popular toys, such as Spring Heeled Jack, Bigfoot, and even Satan (!).  The music is quite catchy and while it isn’t as memorable as that other Konami series it holds up well.

I love to be surprised by little known gems such as this.  Monster in my Pocket is definitely a hidden gem among the NES library of classics and is deserving of any platform fans attention.  The only things holding it back from classic status are its length and slight ease but considering it’ll probably set you back a few bucks at most there’s no reason not to dive in.