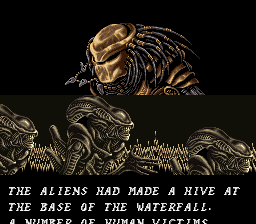 Robocop vs. Terminator.  Freddy vs. Jason.  These things go together like Chocolate and Peanut Butter.  All of these smashups not only seemed like good ideas but were also inevitable.  At the end of Predator 2 when an alien skull was counted among the Predator’s trophies fans knew; it was on.  So when the first slate of Alien vs. Predator products was announced it was only a matter of time until video games would get their just due.  Unfortunately this SNES game was completely unforgettable and fans would have to wait until the following year to see the license done justice.

On the planet Vega 4 workers uncover Alien eggs which quickly hatch.  The Aliens overrun the colonists but not before they send a distress signal to Earth.  But instead of the Earth forces the signal is picked up by Predators looking for their next kill.  Sensing worthy prey the Predator’s head to Vega 4 not to save the humans but for a worthy challenge.

The Alien vs. Predator franchise began in comic books but would soon encompass all media.  There would eventually be a slew of Alien vs. Predator games however this SNES installment would be the first.  Released by Activision in 1993 it is a side scrolling beat em up that pales in comparison to the superior game Capcom would unleash in the arcade the following year.  The SNES game is long forgotten, and rightfully so, as it is a strictly average brawler with no unique features or even engaging gameplay to keep you interested for the duration.

While the game has an assortment of issues it at least gets the look and “feel” of the Predators down.  Although you rely on your fists mostly the shoulder mounted cannon is available but needs to be charged first, leaving you vulnerable to attack.  The trademark Predator weapons such as the Smart disc and the Combi Stick are dropped by enemies.  These items are limited in use but dropped frequently enough that are only unarmed for short periods.  There’s a useless stealth item that turns you invisible but it’s not as if the enemies still can’t see you.  I suppose they felt the need to include it because of the movies but its implementation is worthless.

Unfortunately the reality of playing as a Predator is worse than the idea.  Your move set is extremely limited; there’s a standard punch, punch, kick combo, a throw and a slide kick and that’s it.  Even the original Double Dragon armed you with more than this.   Executing the basic combo for the length of the entire game becomes tedious quickly.

The monotony extends to the rest of the game as well.  You’ll face the same 4 enemies in every level and their attack patterns never change.  Your attacks inflict paltry amounts of damage and every enemy has a longer life bar than yours.  Pounding away on the same squat alien 20 times every level gets tired quickly.  The bosses are much bigger aliens loosely based on the host that spawned them, such as a shark, gorilla, and bat.  But the elation at facing something, anything, different will fade as you realize these fights are going to last nearly 10 minutes.

I’ve been a bit harsh on the game but it’s warranted.  There is so much they could have included to liven up the gameplay if the developers had done even a little research.  How about the retractable wrist blades?  Even the box art displays them!  I wouldn’t have minded using a ceremonial dagger or laser net to help kill the repetitive enemies quicker.  It boggles my mind that the developers did so little to liven up the game.

This is a by the numbers brawler that has no redeeming qualities.  When NES games in the same genre offers more depth than a game years removed something is seriously wrong.  It’s a god damn shame that Capcom’s arcade Alien vs. Predator game was never ported to any console and instead we are left with this shambling mess.