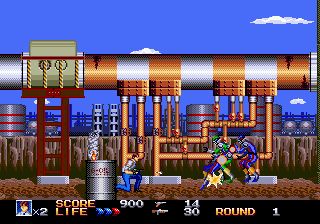 Home console sequels to established arcade games were usually disastrous for any number of reasons.  Back in the day arcade cabinets usually housed technology a generation or two removed from what we were playing at home and usually featured dazzling graphics and sound in addition to polished gameplay.  But there are those few exceptions that not only meet there forbearers but surpass them, a category Rolling Thunder 3 falls into.  As the last game in the series it allows Rolling Thunder to go out with its held high with its excellent action and polished production values.

Set in the same period as Rolling Thunder 2 the plot of this third game follows Agent Jay rather than the familiar Leila and Albatross.  At the same time Gimdo is being taken down by his fellow agents Jay is sent to track down Dread, the second in command of the Geldra forces to ensure all traces of their leadership are wiped out.

As a side story to Rolling Thunder 2 this third installment features a lot of the same gameplay but differs in many subtle ways.  The cut scenes introduced in the second game have become more elaborate and cinematic.  Most importantly the biggest flaws that have plagued the series since its inception were finally corrected, creating the most enjoyable and playable entry in the series.  While it would have been nice to see more games that carried the ideas presented in Rolling Thunder 3 further it’s at least heartening to know that Namco hit it out of the park with this last game.

The arsenal of weapons available has been greatly expanded and the game presents you with a choice at the beginning of every level.  Of the nine weapons available only one can be selected per stage with the caveat that it becomes unavailable forever after.  They run the gamut from the typical shotgun and flamethrower to bazookas, lasers, and 3 types of grenades.  It can be a crap shoot whether your choice of weapon will actually be beneficial since you aren’t briefed on what lies ahead, on the other hand you can forgo a special weapon and cut up enemies with a knife, perfect for saving ammo.

Most importantly Rolling Thunder 3 refines a lot of the more frustrating elements in the games.  Your life bar has expanded to 3 bars, allowing you to survive at least 1 gun shot and collisions with enemies will only bounce you back.  Agent Jay can not only jump and shoot he can fire diagonally as well.  The uninitiated it doesn’t sound like much but those of us that put up with controlling a gimpy secret agent in the past it makes a world of difference.  Now you actually have a choice in whether you want to ascend to a higher level and get shot in the process or kill an enemy from afar.

The level design has seen a bit of a slight shift.  There are still plenty of boxes and doors to hide inside but most levels have more wide open areas to force conflict.  The Geldra are more varied in their forms of attack and are not afraid to get up close and personal.  Managing ammo becomes mandatory late in the game as doors with spare refills become less frequent.  While the normal shot and special weapons have been assigned to separate buttons it’s still easy to blow throw bullets since the Geldra are a lot sturdier than before.  Round 9 in particular can be a sore spot as it takes place on an airliner with no doors.  It’s actually pretty cool how they managed to incorporate the series trademark gameplay element in an enclosed space and is one of the game’s highlights.

Much like Shinobi 3 there are two vehicle based levels; namely a motorcycle and jet ski.  Not only are they a welcome back from the side scrolling action they are pretty challenging as you switch lanes to avoid debris and bad guys.  Boss battles are suitably intense but close observation will identify simple patterns.  In fact now that you respawn right where you died the game is a bit easier.  Not that it’s cake walk but due to the prior changes I listed above the game as a whole is fairer in terms of the challenge presented.

While the two-player coop is sorely missed I don’t believe it would have added much to the game in the first place.  With 10 levels and 3 secret areas waiting to be discovered Rolling Thunder 3 is more than equipped to keep any action fan engaged for many hours.