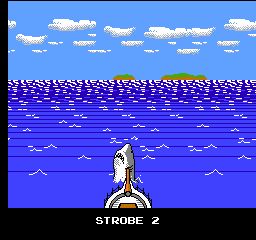 In the late 70s and early 80s Jaws hit the movie industry like an atomic bomb.  Preying on our worst fears about the darkest depths of the sea we couldn’t help being enthralled by this giant shark as it chowed on unsuspecting swimmers even though we were terrified.  Personally I was more afraid of a Nightmare on Elm Street than Jaws.  As a poor kid growing up in the hood we didn’t go to the beach much so a shark eating me alive was not on my radar.  But you have to sleep every night and that’s where Freddy had the edge.   In my mind Freddy Krueger was more likely to get me than a giant shark but I digress.  With the movie’s popularity it was only a matter of time before someone tried to translate that to video games and in 1987 we were graced with Jaws the video game.

Released around the same time as the fourth movie, the Revenge, Jaws is loosely (really loosely) based on that film’s events.  Just how you would build a game around a shark eating people and make it compelling is quite the mystery.  Back then the thought of letting players take the reigns as Jaws and munch on people probably wouldn’t fly but more than likely would have been more interesting than what we would end up with.

LJN, the purveyor of many a quality licensed game (snicker) teamed up with Westone, makers of the Wonderboy series, yet still churned out a shit game.  It’s a mystery as to why this game is looked back on with such fondness; in college I met many weirdos who hold reverence for Jaws but trust me, stay far away.

Strangely enough Jaws takes on the form of a light RPG.  As a diver you pilot your boat to places of interest on the map, much like an over world.  At any time you’ll collide with objects, initiating random battles which take the shape of short (about 2-3 minutes) side view action sequences.  Here you fight various undersea life and occasionally receive items, such as stars (points), crabs (movement speed bonus), and conch shells, which are the game’s currency.  For lucky players who kill a set amount of smaller sharks in these portions a bonus game that mimics Galaga can net you extra shells.

There are very few power-ups in the game, if you can call them that.  Visiting a port the first time will reward you with radar that will notify you when Jaws is close.  Further visits will increase your attack level, which is necessary to actually damage Jaws.  At any time on the map Jaws will randomly appear and initiate battle.  At lower levels you‘ll barely inflict a single point of damage in the time allotted.   At higher levels it’s possible to wear him down somewhat but more than likely you won’t kill him.  Any damage amassed will heal depending on how much time has passed since the last conflict.  In a nutshell you are moving back and forth to build up enough power to kill Jaws once and for all.

The problem is Jaws is 5 minutes of content stretched out to 20 minutes at best.  Literally all the game has to offer is experienced within that time frame.  There are only 2 locations on the map, which I should add is smaller than Gilligan’s Island.  There are only 4 enemies in the entire game and that’s including Jaws.  Traveling back and forth between both ports gets old fast due to the constant random attacks which are designed to slow progress more than give you opportunities to power up.  I realize a game about killing one shark is a flimsy premise but they could have done more to tart it up at least.  And they charged $50 for this back in the day!  Preposterous!

There’s no reason to revisit this product of a bygone era.  Hell it wasn’t worth playing in the first place.   You like Sharks?  Go watch Deep Blue Sea, at least you get to see Samuel L. Jackson get killed in one of the funniest moments in movie history.