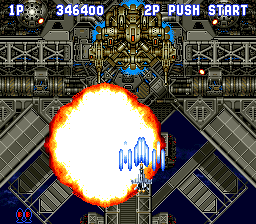 Nowadays anyone that remembers the Aero Fighters series knows it for one of two things: the bat shit crazy story and characters of later installments or the ridiculous prices the rare third installment commands on Ebay.  How or why the series went off the rails no one knows but it is a far cry from the more straightforward first installment.  Aero Fighters, unlike most shooters of the day, does not have any unique scoring or power-up systems and instead relies on its hectic action instead.  While Aero Fighters is a solid game it does come across as a bit generic.

Although Aero Fighters does play it straight the indications of the series future wackiness are still there.  The wonderful cast of characters comes from 4 continents around the world.  They encompass a variety of stereotypes, such as the typical red blooded American from the US, Hien the ninja and Mao Mao the idol singer of Japan, Kohful the Viking (?) and Tee-Bee of Sweden, and Villiam and Lord River White from Britain.  Their between level quotes are often hilarious but most importantly they each have their own unique ships.

Character selection has an effect on the game in different way aside from the weaponry available.  In multiplayer once a country is chosen both players are forced to pick between the two given characters.  The order of the levels will also change depending on the country chosen.  It might not sound like a big deal but certain stages aren’t’ conducive to allowing newer players time to get used to the game’s pace.

Each ship/character combination has a unique weapon, allowing a wide range of power-up styles.  Hien’s Ship fires shuriken in an arc that widens the stronger it gets until finally evolving into kunai.  Keaton and Keith are the closest to a standard shot that doesn’t excel in power or range but occupies a nice middle ground.  Villiam’s spread gun is useful for covering a wider area at all times but sacrifices power for it.  Tee Bee’s plasma cannon is extremely powerful and destructive at higher power levels.  The smart bombs also differ per character with some more useful than others.  Villiam’s carpet bomb covers a larger range than the others while Keaton’s tactical nuke only hits a small cluster but not only destroys any bullets in its path the loop de loop that precedes it is handy in a pinch.

If there is one word to describe Aero Fighters it would be hectic.  Enemies come in massive numbers with bullets flying freely.  Most enemies take a few shots to kill and in the numbers they appear it quickly becomes important to prioritize.  Most levels aren’t very long, providing enough time to power-up in time to face the gargantuan bosses.  The massive air ships and planes that make up the bosses have to be taken down in stages and just when you the fight is over a compartment will open up or transform and they come back for more.  Some of these fights last as long as the levels themselves and could be classified as epic.

It goes without saying that Aero Fighters is not an easy game.  Due to the amount of bullets and enemies death will come frequently.  Upon dying only one loose power-up is dropped, leaving you pretty much defenseless.  The boss fights are already long as is but with reduced firepower almost seem impossible.  Continues are limited and chances are you won’t see the end on your first few tries.  While the rest of the game isn’t exactly all that memorable your fingers certainly will.

The SNES port is more or less exact to the arcade.  The resolution is lower and there is some minor loss of detail but otherwise it recreates the arcade game surprisingly well.  The music has taken a hit though, with generic metal music replacing the arcade game’s well done score.  An optional boss rush has been added that is surprisingly fun and two additional characters that put the fruit in fruity.  It doesn’t do much to extend the life of the game but they are nice gestures.

Unfortunately Aero Fighters had a very small print run and is one of the harder games to track down.  Expect to pay a large sum for the game and while its decent enough I can’t really recommend it in that case.