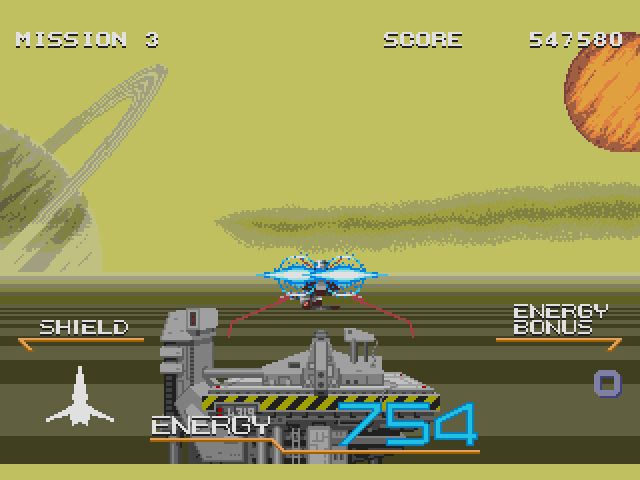 Ugh, some games simply weren’t meant to be ported.  I can certainly see Sega’s reasoning; at the time they needed anything they could get to stop the impending Nintendo juggernaut.  Third parties were still afraid to do anything to piss Nintendo off and more importantly they sure as hell were not going to ruin that NES gravy train.  Sega had a laundry list of arcade games ripe for home console ports but in the case of Galaxy Force 2 the Genesis was ill equipped to handle it, leaving gamers with a technical mess that is unplayable.

I won’t bore you with the plot since it has little bearing on the game to begin with.  In the arcade Galaxy Force was a technical marvel, using Sega’s super scaler technology to simulate a 3-d environment.  Seeing dozens or even hundreds of sprites scale in unison effortlessly was impressive back in the late 80s.  More impressive than the graphics were the deluxe cabinet that housed it; it tilted side to side in unison with your ship and helped to create a feeling of really being there.

No home console version could ever recreate that experience but they could at least replicate the gameplay and it’s in this regard that the Genesis version fails.  This is a situation where the console simply doesn’t have the necessary grunt to power the game.  It might sound fucked up but the SNES with its Mode 7 would have been a better fit but that sure as hell wasn’t happening in 1991.  As it is Galaxy Force 2 is worthless not just because it’s terrible but because there are better games in this genre utilizing real 3d.

In essence Galaxy Force is Afterburner in space.  You pilot your ship across 6 different planets as you fight the forces of the Fourth Empire.  There are only two weapons, a useless Vulcan cannon and homing missiles that function similarly to Panzer Dragoon.  Unlike Afterburner you have full range of motion about the screen as you dodge enemy fire and other assorted obstacles.  Each planet is divided into two segments, the outside or surface and the interior fortresses leading up to the final cores that need to be destroyed.

Galaxy Force 2 wears its arcade lineage on its sleeve with its energy gauge.  The energy gauge functions as fuel and a life bar that constantly ticks down as you progress.  Colliding with walls or enemies will of course deplete it faster.  Set checkpoints in the levels will replenish energy and your overall activity during each level is assessed at the end and you are awarded more energy accordingly.  Since there are no continues it forces you to more or less go full blast in order to reach the end of each planet with enough time/energy to actually survive.

And that’s about where the Genesis’ versions similarities to the arcade game end.  Since the Genesis wasn’t capable of sprite scaling Sega tried to duplicate the effect using different sized sprites at set distances which simply doesn’t work.  The animation is as choppy as it gets which interferes with the controls, making dodging the little enemy fire a hassle.  In fact the entire game is a flickering mess and due to the lack of buttons on the Genesis controller at least one function has to be set to automatic with all 4 default control schemes.

Genesis on the left, arcade on the right.

The hit to the graphics doesn’t end with the scaling.  Large chunks of the environments have been removed or redesigned to the point where it bears little resemblance to the arcade game.   This is most evident in the lava planet of level 2 or the forest of level 3.  The interior tunnels have suffered an even bigger hit in this port. These segments in the arcade were some of the most visually impressive but have been relegated to garish two tone raster effect that is an assault on your eyes.  The scrolling in these parts is really bad and never seems to keep up with the direction you’re supposed to be flying.

This is one of those games that should have been saved for more powerful hardware.  After seeing what Core Design achieved with Soul Star and Thunderhawk Galaxy Force would have been a better fit on the Sega CD. As it is it remains one of the biggest lost opportunities for Sega and a gigantic flop.