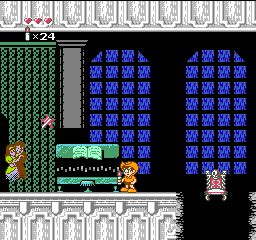 Well they can’t all be winners.  While Capcom did the Disney license justice there was bound to be a runt in the litter sooner or later.  Adventures in the Magic Kingdom is basically an advertisement for Disney world in video game form.  For poor people like me who never got to go to those fabled halls it should have been up my alley.  But when you think about it how much fun is it to be a dude controlling another dude going on all of the rides when you’d rather do it yourself?

The opening parade for the Disney Land theme park is about to start but Goofy has lost the six keys needed to open the Enchanted Castle’s gates.  Without enough time to go searching themselves Mickey and Goofy enlist you, represented as a ten gallon hat wearing goon, to find them.   You know they say they don’t have enough time yet Goofy and Mickey assist you in some of the games. Food for thought.

As a mini-game collection Adventures in the Magic Kingdom could have been a fun mix of numerous different play styles all under the Disney veneer.   However it fails due to the busted controls of many of the attractions and the simplicity of the games themselves.  It could be argued that this was intended for a younger audience but due to the previously mentioned problems it skews a bit higher and more importantly won’t hold their interest for long.

The park itself serves as the hub as you explore each attraction.  Each of the five games is self-contained, with the last key gained by answering trivia questions posed by random park attendees.  2 of these, the Haunted House and Pirate Island, are straight platforming stages.  The rest are truncated versions of other more popular games. Space Mountain is an on rails Quick Time Event as you travel to Star F to find the key.  As the description implies it consists of following on screen button prompts that increase in speed and frequency the further you progress.  It’s incredibly unsatisfying, with the only excitement coming from the occasional meteor or ship that has to be shot down.  This one can be tough as the tempo increases and will more than likely drain a few lives.

Big Thunder Mountain is another rail segment.  Literally.  The goal is to lead a train down the correct path to reach the exit.  This mini-game is extremely short, at around one minute but can be the most frustrating.  Your view of the track is limited, meaning every turn is a blind guess as to whether it’s the correct path.  It ultimately boils down to a memorizing the layout, which is the point I suppose but lives are in short supply and you can’t really afford to die repeatedly to do so.  Autopia is a shortened version of Bump and Jump or Spy Hunter.  Although it’s supposed to be a race to the finish against Panhandle Pete ultimately you only need to survive before time runs out.  There are rival karts, broken bridges, and other obstacles to contend with.  As a whole Autopia is the most satisfying of the bunch as it has next to no problems.

The Haunted House and Pirate Island form the meat of the game.  These two are the longest and are traditional platformers, offering something for fans of the genre.  Pirates of the Caribbean sees you rescuing six children (a bit heavy don’t you think Capcom) and making it to the exit where a boat will take you to safety.  Unfortunately it suffers from loose controls.  You don’t get a candle for offense until close to the end, leaving you to rely on pushing barrels in a pinch.  This leads to many cheap unavoidable hits in the process.  The Haunted Mansion fares better as you are armed from the start.  This level relies more on platforming than fighting enemies but has little margin for error.  The time limit for both levels is very strict and more than likely will cause a few deaths.

When you add up all of the little problems each game has the game is a bit too challenging for its intended audience.  You can use the stars collected for a few purposes such as invincibility and extra lives but it doesn’t help much.  Even if that weren’t the case the game consists of poor man versions of actual fun games.    Why play this when you can simply play those games instead?  That leaves Adventures in the Magic Kingdom with little redeeming value and worthless to everyone.