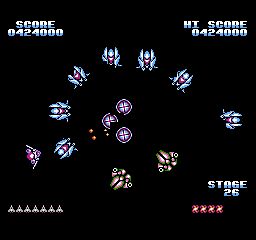 I remember playing Gyruss in the arcade back in the mid-80s and liking it well enough.  Of course I didn’t have enough money to complete it back then so the presence of an NES port should have been cause for celebration.  However some of the additions made to the game exacerbate its problems instead of creating a richer experience.

What little semblance of a plot is laughably bad.  Evil exists in the universe and so mankind embarks on a quest to rid the galaxy of it.  What this amounts to is a lone ship being sent on a tour of the galaxy from Pluto and finally the Sun.  Think about that.  One ship against all the evil in the universe.  Even by shooter standards that is ridiculous.

The most unique aspect of Gyruss would have to be the viewpoint.  Gyruss was a tube shooter that tried to simulate the illusion of flying into the screen.  At first it resembles a normal vertical shooter however in actuality it is closer to Tempest and Galaga.  The viewpoint is behind the ship and you have a full range of movement around the screen in a circle.  The Galaga comparison comes by way of the enemy patterns.  Enemies attack in set formations however now they come from all sides.  Your ship moves pretty fast so in most cases you can react quickly enough to attack before they disappear.  Well disappear isn’t the right word, any enemies that manage to get by you will reside in the background and come back at the end of the level for one last shot at your hide, sometimes mutating in the process.

Unlike most shooters there are very few weapons in the game.  You have missiles that can destroy most targets in one shot and a twin shot, that’s it.  If you’re good enough you can build up a large stock of missiles to end boss fights quickly.  Other items are rare, a smart bomb and extra lives.  It isn’t much but the game’s structure means you won’t need more than that.

Altogether there are 39 levels, with 3 for each planet and a bonus level after each one.  Most levels are incredibly short, sometimes less than a minute.  The difficulty curve gives you enough time to get used to navigating around the screen to dodge enemy fire.  In the initial stages most enemies don’t bother to fight back, allowing you to study enemy patterns.  All enemies move in a particular pattern that becomes more erratic the deeper you get.  Allowing them to get by will come back to bite you in the ass later once all the waves have passed since they’ll usually evolve and become harder to kill.

As enjoyable as Gyruss can be at times it is incredibly repetitive.  In the arcade there were only 24 stages and the game would loop once you reached Earth.  For the NES port you travel the entire solar system + bonus levels for 39 in total.  That’s a lot but every planet follows the same formula; 3 warps to the next planet broken down as such: one level with a few waves of enemies, the second adds 4 satellites, and the last is the same as the first and ends in a boss fight.  The only thing that changes are the enemy patterns and the occasional piece of debris.  By the midpoint the repetition is overbearing.  Less levels or more variation would have gone a long way toward fixing this.

Even with the enhancements added to the NES version (better graphics, new music, a few power-ups) Gyruss is too repetitive for its own good.  There are far too many shooters good shooters on the NES for me to recommend this despite its unique viewpoint.