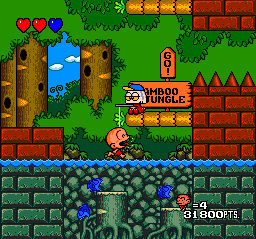 After the success of Bonk’s Adventure a sequel was inevitable. That it turned out so well was no surprise as the first game, while rough around the edges, was still a fun game.  All they had to do was smooth out those flaws but instead they went above and beyond the call of duty.  The difference in quality is very much like going from Super Mario Brothers to Super Mario Brothers 3.  Bonk’s Revenge is the best game in the series and perfectly encapsulates what made him different from the likes of Mario, Sonic, and every other mascot roaming the land.

Bonk’s Revenge was released in 1991 for the Turbo Grafx-16.  King Drool III has kidnapped Princess Za and half of the fricking moon.  Of course rescuing both falls on the shoulders of cave boy Bonk.  You know it’s never quite clear what he’s seeking revenge for.  Is it because the Princess was taken again?  Does he really care about the moon that much?  Who knows?  Gameplay is exactly the same as the first game with a boat load of polish making the trip far more enjoyable the second time around.

All of your abilities from the first game remain intact.  Your large melon remains your primary form of offense.  The flying headbutt attack that was such an issue in the first game with its spotty hit detection is no longer an issue thankfully.  Spinning in the air while jumping doesn’t quite work the same as the original as you no longer move as fast and this leaves you a bit vulnerable.  The meat power-ups return with slight differences this time.  1 piece of meat will still allow you to freeze all enemies on screen by slamming the ground  A second piece will cause you to go nuclear and after a brief period of invincibility you will possess the power to breath fire for a bit.  The food used to replenish health is in greater supply thankfully as the game is much harder and longer.

The 3 difficulty settings correspond to how long the game is rather than the inherit challenge they suggest.  Practice lets you run around the first level, intermediate covers the first four stages with all 7 levels only available on expert.  The levels themselves have undergone a massive overhaul to avoid repetition.  Each level is broken up into multiple parts and as such will take you through a variety of locales.  There are very few straight left to right paths through a level as many will offer multiple routes to an exit.  Exploration is rewarded with many bonus stages that have different stipulations for their rewards.

Although you are given plenty of opportunities to earn extra lives you will burn through them if you don’t play carefully.  Enemies swarm in greater numbers and the level hazards come in all shapes and sizes.  The bosses require memorization of their patterns and have very particular hit boxes.  You can easily waste a few lives determining where they are vulnerable, a fact made more evident because of the loss of invincibility with your spin jump.

As good as the first game looked Bonk’s Revenge is even more striking.   The old adage of bigger, badder, better applies here.  The animations are funnier, the backgrounds more detailed, and the enemies bigger.  The bosses are especially a showcase for the progression the developers had made in the years since the first game.  A figure skating ballerina?  A cigar chomping wolf on a flying submarine?  The sense of anything goes carries over from the prequel and despite how ridiculous it might seem it never seems absurd.  I would even say the presentation benefits from the wackiness apparent throughout the game.  The soundtrack reaches the same heights and although some of the songs are recycled from the first game it doesn’t even matter since they fit so well.

You can tell the creators had fun throwing in everything but the kitchen sink and the fact that it all gels together so well is a compliment.   This is everything a sequel is supposed to be.  A long quest, a wealth of secrets, and a decent challenge will provide a few hours of entertainment.   You can’t really ask for anything more than that.