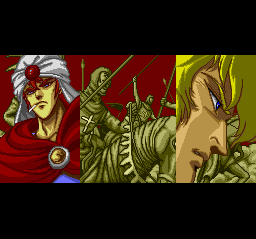 Remember when old video game magazines would have numerous screenshots of cut scenes?  These were never labeled as such and often times would be mistaken for actual gameplay.  At least I did, but maybe I was just a dumb kid.  From the Y’s series to Cosmic Fantasy I would see these games and thought they were the most awesome creations known to man.   Of course the truth is a lot of them were terrible once I got to play them, but one game that bucked that trend would be Exile.

When I was 12 cut scenes like these were the coolest thing in the world.

Exile was released in the US by two publishers: Renovation handled the Genesis version while Working Designs had the TG-16 CD version covered.  The basic framework of the game is exactly the same for both however there are some stark differences of which I’ll cover later.  This is actually the second game in the series, as we never received the first due to the MSX and PC-88 computers never crossing the Pacific.  That would actually be a blessing as this installment is a complete 180 in terms of quality.

The Exile series is somewhat controversial for various reasons: the drug references, the religious overtones in the story and so on.  These seem quaint today but back then were a concern. Our hero Sadler is a Syrian assassin investigating rumors of strangers lurking near his hometown.  Panic is in the air as stories of Christian crusaders (renamed Klispin crusaders to avoid controversy) rampaging throughout the continent and conflict with them is inevitable.

What starts out as a simple fact finding mission turns into a worldwide quest to recover 3 artifacts needed to complete the Holimax (more or less the Holy Grail) and bring about world peace.  The game is rife with cameos from numerous historic figures, such as Pythagoras and Mani.  It was all of these elements combined that would cause such a stir, and both versions have been censored to a degree. 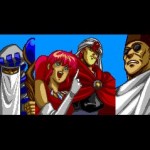 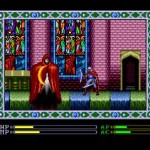 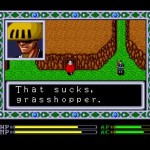 Gameplay is split into 2 parts.   You wander around towns and fields in an overhead perspective like many RPGs of the time.  Although you travel with 3 other companions for most of the game, they are useless, as Sadler is the only one playable.  They exist simply to espouse advice.  These segments lead to the action portions of the game where it becomes a side-scroller.  These portions of the game take place in maze like structures as you enter various doors that teleport you around the levels.  You can attack in front or below you and have access to 7 or 8 different spells but these are completely unnecessary as the game is quite easy.

This games lack of difficulty can largely be attributed to the numerous areas where enemies will spawn infinitely, allowing you to grind a few levels away by holding the attack button.  Even the bosses pose no real challenge if you are at the appropriate level or above.  The only challenge will come from surviving long enough to find your objectives as the layouts of each dungeon can be confusing.  Teleporters are a constant element and will necessitate the creation of maps to avoid wandering in circles for no good reason.  Once you’ve figured out the correct path you’ll realize how short most of the dungeons are.  It’s too bad the action segments weren’t longer as they are a brief but enjoyable relief from information gathering. 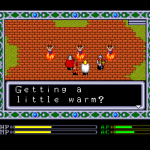 Jesus Christ it’s like they used Babelfish before it ever existed.  The last scene was cut from the Genesis version.

In terms of graphics both versions are near identical, with the TG-CD version having a slight edge in terms of color.  The cut scenes are also fully animated with voice acting in that version as well.  The soundtrack is excellent for both games, and once again the CD version wins, but that’s a no brainer.  The biggest difference comes from the translation.  The Genesis game is nigh unintelligible; Engrish doesn’t do it justice.  The degree of censorship is also distinct.  The CD game remains almost unscathed in terms of content; the only changes made were to drug names and religious references.  The Sega game fared worse; there’s an entire town missing, and the naked, drunken festival is covered up.  If you have a choice definitely go for the Turbo Grafx version.

While not ground breaking in any way this remains a fun game to plow through in a few hours.  It has a unique setting and story elements and as a whole is polished.