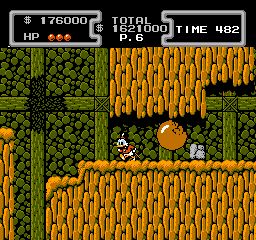 In the 8-bit era Capcom were one of a few publishers that were virtually untouchable.  Nearly every game they put out was a classic, with franchises that endure to this day.  Licensed products from Acclaim and Ocean cluttered up store shelves but Capcom were able to turn that license into the equivalent of video game gold.  Their Ducktales game is easily one of the greatest games ever made for the NES and is rightly revered as a classic to this day.

Ducktales was released in the fall of 1990.  A platformer much like Mega Man or Mario, the game takes you on a wild around the world as you search for hidden treasures worth ridiculously large amounts of money.  Scrooge McDuck is a greedy bastard and although he’s rich he still wants more.  That greed provides the impetus for the adventure.  The objective of every stage is to collect as much money as possible as you work your way to the end, culminating in a boss fight for one of the secrets treasures.

The similarities to Mega Man are apparent from the get go.  You have your pick of 5 stages: Transylvania, the Amazon, the Moon, the Himalayas, and the African Mine.  Although they aren’t given a rank in terms of difficulty, some are best left until you become familiar with the uses of your cane.  The cane, much like Mega man’s blaster, is a multipurpose tool except even more versatile.  From using it to bounce off nearly any surface, including enemies to smacking blocks around, it’s the only weapon in the game.

It sounds limiting, but its applications throughout the game are nothing short of ingenious.  You can’t use it to attack directly: you’ll have to bounce on an enemy for that or use any of the conveniently placed blocks to hit them with.  Your pogo jump is used offensively as well as to cross spikes or pits by bouncing on enemies. Many of the levels are designed precisely with this in mind, forcing you to become familiar with the practice.  The control is intuitive and tight as a button, which it needs to be as you’ll need to master bouncing off heads in rapid succession or controlling how high you bounce coming off of spikes.

The levels are filled with gems and chests that pop out anywhere.  Every level is constructed in such a way as to literally force you to explore every nook and cranny because there just might be a gem worth $50k in that dead end.  The amount of secrets rivals the Mario games and to find even a good portion of them will require you to become a better gamer.  The game isn’t hard, far from it, but you’ll often see areas that you’ll question if it’s possible to reach.  “Can I pounce on that flying alien and reach the next one in time?”  Then you’ll try it and it works!  And you’ll be rewarded for your experimentation every time.  It almost becomes a score attack shooter as you try to find as many gems as possible in a given level before reaching the end.

The uses for your pogo cane seem straightforward until you stop and examine the level layouts.  You’ll notice blocks that can be pushed around to access parts of levels hidden from view.  There are sometimes multiple routes through a level and just out of pure greed you’ll probably double back to get any items the other paths may hold.

For fans of the show there are numerous cameo appearances: Launchpad will take you back to Duckburg if you like, Mrs. Beakley will refill your health meter, Huey, Dewey, Louie, and Webigail all offer hints or need to be saved at varying points.  Hell they even threw in a cameo from Gizmo Duck and Bubba!  How’s that for fan service?  The only disappointment would be that characters such as the Beagle Boys and Flintheart Glongold, the main antagonists in the show, are underutilized while we are left with lackluster bosses.

This is one of the best platformers ever made and even after all this time has lost none of its shine.  The random nature of the series misadventures is captured perfectly in the game and in fact taken as a whole could very easily fit as a lost episode of the show.  That’s some of the highest praise you can get on top of being such a stand out game.  Rather than making  a totally unrelated game and shoehorning in the license Capcom used it to craft one of the seminal games for the NES that should not be missed by anyone.