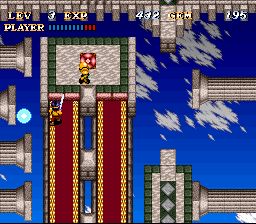 Before the PlayStation busted open the floodgates for RPGs in America the SNES was the reigning champion of the genre.  While we didn’t get the breadth of titles the PS One eventually would, there was still quite a selection to choose from.  Enix of America was a very active publisher at the time despite leaving the 16-bit installments of the Dragon Quest series in Japan for some strange reason but did find time to release gems like this.

Soul Blazer was released at the tail end of 1992 in the US and surprisingly not until 1994 in Europe.  You control an avatar of the Master, sent to restore the population of the world, plants, animals, and humans alike.  In his greed King Magrid forced Dr. Leo to create a machine to summon the evil Deathtoll and in exchange for 1 gold apiece everything in the world has been changed into a spirit. If the premise sounds familiar it’s because Quintet, the game ‘s developer, have used the theme in most of their works, starting with Actraiser.  This is the first in an unofficial trilogy of games that share the same premise but differ in terms of execution, the others being Illusion of Gaia and Terranigma.

You travel through six regions of the world as you slowly free everyone in order to progress.  This is accomplished by destroying the enemies that spawn from the monster lairs that populate each zone.  By destroying them the lair in turn is removed.  This will cause varying effects, from returning a citizen, opening up a pathway or even creating treasure chests.  You are explicitly shown where and when this occurs every time so as to avoid confusion.  It is mandatory for the most part to destroy all of the lairs you come across with the exception of the onesthat you are unequipped to deal with initially.  Aiding you in this task is a wide assortment of weapons and armor.

Unlike most RPGs your armaments do not become obsolete when you obtain a shinier new weapon; each one usually has a specific purpose with some like the Zantetsu sword forcingyou backtrack to previous areas to clean out stray monster lairs.  You possess a trailer soul that orbits around you and uses the gems you collect to power your different spells.  Depending on the spell you’ll have to keep in mind its range and the position of your trailer soul before using them.

What makes the game such a joy to play?  You never have to grind for levels for one.  Despite the fact you are essentially playing Gauntlet with RPG elements it never gets boring.  The monster lairs are never too plentiful and usually the enemies will all come spilling out if you wait long enough so you can kill them in one shot.  Backtracking is minimal; generally if someone important is released they will speak directly too you and ask you to come see them.  Shortcuts back to the main hub for each region are in ample supply and open up when you need them.  The puzzles if you can even call them that essentially boil down to finding the lair needed to break down a wall or right item/weapon needed.  Secret items and magic are in abundance if you want them giving you further incentive to revisit past dungeons.

The story manages to be entertaining despite your silent protagonist.  You have the ability to speak to everything be it trees, animals, or even household appliances like doors and chairs.  Not everyone is reborn exactly as they were and in some cases it can be startling.  I won’t go so far as to call it deep however the story manages to be poignant in places.  From a married couple reunited in an unexpected way to a king lamenting the meaning of being a ruler, every chapter has numerous bits like this that might even make you stop and think.  These story bits end up coming from the unlikeliest sources such as a tree stump that dreams about being a bird to fly wherever it would like.  There’s a lot more going on than it seems at first.

Although it shares a lot of similarities with Actraiser Soul Blazer manages to forge its own identity.  Even 2o years later it still remains fun to play.  Fans of Zelda definitely look into this.