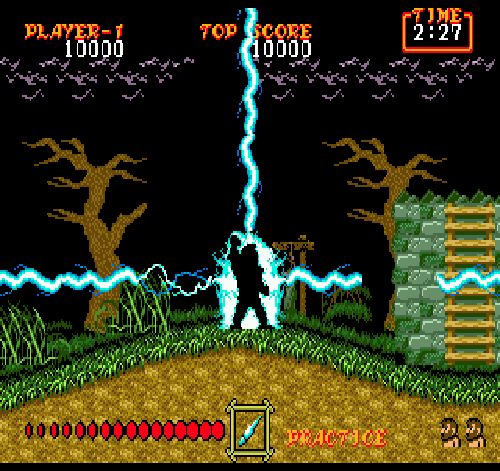 For those of us that love arcade games the early years of the Sega Genesis life were practically a dream come true.   The holy grail in those days was the arcade perfect port, or at least as close as possible to recreate the arcade feel at home.  The NES and Master System saw their share of conversions but usually there was something was off.  With the Genesis’ power that dream started to become a reality and Sega responded in kind with numerous arcade conversions.  While they were always welcome, in some cases a straight port is not a good idea and Ghouls & Ghosts is a perfect example why.

The number one goal of any arcade machine is to suck your quarters dry.  If you’re not putting another coin in the machine every 5 minutes the game has failed at its job.  Reaching the point where you can survive long periods usually means you’ve dumped a reasonable amount of cash to attain that level of skill.  Arcade games accomplish in numerous ways: cheap enemies that fly in off screen before you can react, strict time limits, cheap stuns that last way too long (Gauntlet I’m look at you), bosses that inflict insane amounts of damage, etc.  In the case of Ghouls n Ghosts Capcom does so by throwing as much shit at you possible in the shortest span of time.

Released in 1988 by Capcom, this was the sequel to Ghosts n Goblins.  Like that game you control Arthur on his quest to restore the souls of everyone in the kingdom stolen by the demon Loki.  Of course this includes a princess who is more than happy to show her appreciation for your heroic deeds.  Spanning only 5 levels, you retain all of your abilities and weapons from the first game but now have some new toys to play with.  The arsenal of weapons has been expanded to include a short range sword, a discus, a giant axe, and the Psycho Cannon.  You have the ability to fire upward or downward while leaping which helps tremendously in dealing with the chaos onscreen.  The new golden armor is the most important, granting the power to charge your weapon with magic for different effects.  All of these elements would make for a fantastic adventure if not for one thing: the game is unfairly fucking hard.

I’m not one to shy away from a challenge but there are times where it borders on the ridiculous.  The amount of enemies thrown at you (literally) borders on absurd.  You become fearful of making even the slightest jump because chances are, something’s waiting off screen.  While you do have a large arsenal some of the weapons are just plain crap.  The sword, while powerful, forces you into melee range which is pretty much the kiss of death.  Try killing the Red Arremer with that thing.  The axe flies diagonally, which is just stupid.  The weapons end up being situational but the problem is they drop randomly aside from a few set chests that always spawn in certain spots and even then it’s a crap shoot as to what you’ll get.

The flip side to this, which is kind of hilarious in retrospect, is that the bosses are pushovers with easily identifiable patterns.  Thank goodness for small favors.  Following series tradition, you’ll have to play through the game twice; after the first time you start from the beginning to find the Psycho Cannon to defeat Loki.  No passwords, no battery backup but at least you have infinite continues.  As bad as it was the first time you have to do it all over again and the game is harder the second time around.

Third parties were still locked behind Nintendo’s draconian exclusivity deals and so this port was handled in house at Sega.  The conversion, while far from perfect, was still one of the best ports during the time of its release.  The graphics are a bit washed out compared to the coin op but can be compared to the CPS1 driven coin op favorably.  The backgrounds have taken the largest hit as there is a large drop in detail but the soundtrack is a very favorable match all things considered.

It starts to get ridiculous really quickly.  Christ look at that last screenshot!  The level started 5 seconds ago!

It isn’t uncommon for additional content and gameplay tuning to occur for ports.  Fighting games are the biggest examples of this.  This is the type of adaptation that would have benefited from tweaks to better fit a home console.  The sad part is despite my complaints it’s still a good game.  I just can’t recommend it unless you’re a masochist or glutton for punishment.  You would be better served going with Super Ghouls & Ghosts, which, while hard, presents a fairer challenge.