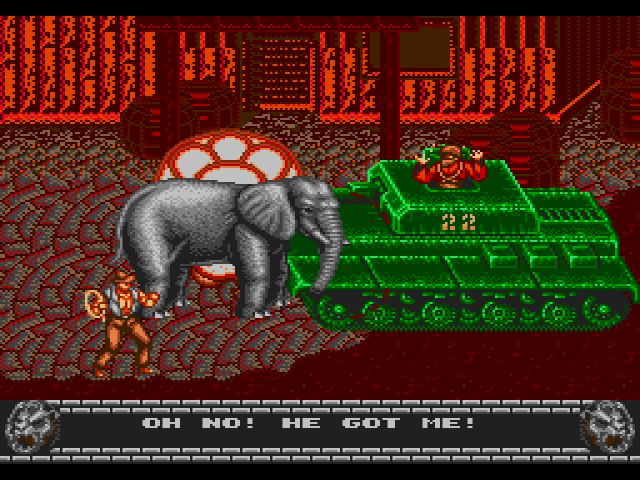 Don’t be fooled by the key art depicting the game’s protagonist as some sort of Indiana Jones inspired bad ass. You won’t be raiding tombs and seeking treasure but instead taking out poachers and freeing captured animals. Basically the human equivalent of Sonic the Hedgehog. Lest you get hippy notions of peace and happiness and frolicking with animals the game is actually pretty brutal and gory and takes a very, uh, “strange” turn towards the end that No One will see coming. Gameplay wise this is a classic beat em up in the Final Fight mold although not as nuanced as that game; think of it like Bayou Billy if it didn’t suck. Growl was not a standout game in the arcade but was well designed and fun while it lasted. Taito’s Genesis port tries to capture what made the game so good but comes out flawed in the process.

There are four characters all with varying stats but let’s be honest, they don’t matter. It all comes down whether you want the cool looking dude with the pink shirt and sunglasses or the very obvious Indy rip off. Gameplay is pretty simple as the game only makes use of a simple three button setup, punch, jump, and special attack. There are a variety of attacks you can perform however there is no set button combinations to pull them off which is pretty frustrating. That is also leads into one of the game’s biggest flaws.

The largest flaw with this version of Growl is the slowed attack speed. Normally in most brawlers once you start your attack combination enemies cannot counterattack. Here though there is a delay between punches which leaves an opening to get smacked in the face. This makes regular attacks useless. It almost seems as though the game were designed with this in mind as there are always weapons present, to the point where you will rarely ever be without one. This isn’t like traditional brawlers where they disappear if you drop them too much; so long as you pick them up within 7 or 8 seconds you can keep the same weapon indefinitely.   The whip in particular is almost game breaking as it hits enemies both in front and behind simultaneously.

This is a far cry from the typical game in the genre as it isn’t afraid to fill the screen with as many as 12 bad guys at once. Granted they’ll go down after a few hits but it isn’t a sight you see too often. There are plenty of weapons to bludgeon the bastards with and you’ll be surprised to see how gory it gets as rocket launchers and bombs blow them up into chunks. As cool as it is thought Growl also blows its load far too soon. By the end of the first level you will have seen nearly all of the enemies you will face throughout the length of the game which gets repetitive fast. The large numbers distract from this a bit but rarely does the game vary up the combinations they appear in. Some of the arcade’s better set pieces have also been cut from the game which cuts down on the variety as well.

Despite the numerous enemies that attack all at once you’ll be surprised to find how easy the game is overall. Your life bar is comprised of four bars but you can take a large amount of punishment before it ever dips. Life restoring food isn’t common but it almost seems unnecessary since you’ll have to actively go out of your way to die. Although you only get one life per credit it’s entirely possible most will complete the game with the default 3 but you can increase it to 7 in the options menu which is overkill. With that in mind you’ll blow through the game in about twenty minutes and never feel the need to ever play it again.

For its Sega debut Growl’s graphics were completely redrawn and unfortunately it is ugly in comparison. The sprites are about half the size of the arcade and completely lacking in detail. The beautiful backdrops fared even worse. You’ll visit many of the same locations however they are barely recognizable to their arcade big brother. About the only real noteworthy feature I can mention is that this version manages to retain the same amount of enemies on screen with no slowdown but considering how many nondescript the sprites are it would be shameful if they couldn’t manage that much at least. The music is completely unmemorable and nearly all of the voice clips have been removed as well. Honestly I shouldn’t be so surprised that this port turned out so bad; it was early enough in the system’s life that developers were not aware how hard they could push the system but it is still disappointing in the end.

With its lacking gameplay, repetitive enemies, and lack of multiplayer (a staple of the genre) there is no reason to bother with Growl considering there are far better brawlers available for the system. It’s a damn shame this port turned out so bad as it could have added some needed variety to the genre. Oh well.