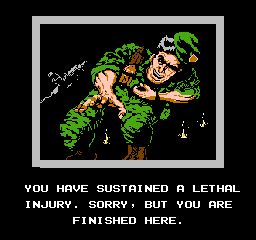 I’ve always appreciated light gun games from afar but was rarely interested enough to spend my quarters on them for various reasons. Light gun games back then were typically always a quarter more than everything else and when it came down to it I’d rather spend my 2 or 3 quarters on Street Fighter or Teenage Mutant Ninja Turtles than a game of Lethal Enforcers that usually ended in less than a minute. That and some random asshole would somehow break the damn machine making it worthless. Operation Wolf, alongside Virtua Cop, House of the Dead, and the awesome Terminator 2 was one of the few gun games I bothered to try in the arcade. I liked it, which made me anticipate the NES port. Unfortunately as much as I wanted to like it the control options and the game’s high difficulty make this not worth a purchase.

Operation Wolf, despite its status as a light gun shooter ranks up there with Bubble Bobble and Chase HQ as one of the most heavily ported games of all time, hitting every possible platform of the time. Most of these systems lacked a light gun which presented an interesting challenge in terms of retaining the same experience at home but the NES and Master System did not have that problem. This a game that I only managed to play using the NES Zapper a few times. Let’s be honest, the Zapper wasn’t the most accurate light gun in the world (oh the wonders of 1980’s technology) and I’m sure I wasn’t alone in that once the novelty of Duck Hunt and the few other games that supported it wore off it went into the closet never to be seen again. Luckily the game is perfectly playable using the traditional controller although it is less than ideal. This NES version is an adequate port of the arcade hit but I feel it could have been better with a little bit of balancing.

Surprisingly using the normal NES pad works out far better than the Zapper. The cursor moves at a decent speed (but not fast enough, more on that in a bit) but the most important factor is that you can press the button repeatedly for rapid fire. Once you’ve exhausted your supply of grenades you’ll have no choice but to pepper the tanks and helicopters with bullets and the Zapper with its slow calibration simply can’t keep up. This is absolutely mandatory in the late game as the game becomes sheer chaos and will chew you up in seconds. It isn’t perfect however as the hit detection is loose and will cause you to waste many precious bullets.

Operation Wolf differed from other games in the genre in that the goal of each level wasn’t to simply make it to the end. Every stage has a set number of soldiers, tanks, and helicopters that must be destroyed. Once those parameters were met the level ended, meaning it could take a few minutes or up to 10-15 depending on your skill. The NES port retains that but differs even further by playing the levels in a set order. In the arcade you could tackle the missions in any order and there was some strategy to the order chosen such as hitting the ammo dump before tackling the tougher airport and concentration camp. You could even skip half the game if you wanted. Here there is a set order which to an extent presents a difficulty curve but in the end the game is particularly brutal no matter what.

Regardless of which control scheme you end up using Operation Wolf is a tough game, especially in the later stages. The Zapper suffers from its lack of rapid fire and by the middle of the game that is crucial to survival. While the cursor moves at a decent clip with the controller it can’t keep up with the sheer numbers of enemies that litter the screen later on. As the missions require you to kill more and more soldiers and helicopters on top of saving prisoners it starts to feel all but impossible to survive longer than a few minutes. If the game weren’t so stingy with health power-ups it would be manageable; you’ll be lucky to ever see more than one per stage and it doesn’t even heal you that much. With just a few small tweaks I would actually recommend this as I do still like it to an extent but not so much to overlook how frustrating it is.

Perhaps the high difficulty was to mask just how short the game is. This is still an arcade game at heart which means it is designed for short bursts of play and to suck the quarters out of your pocket. Each of the six missions can be completed in a few minutes if you are good enough. While the requirements for completion increase it can’t hide the fact that the game is only thirty minutes long. The chances of anyone beating the game that quickly is low without an insane amount of practice though.

Taito certainly tried and succeeded somewhat in replicating what made Operation Wolf great. However it is painfully obvious that this should have stayed in the arcade. Pass on this one.