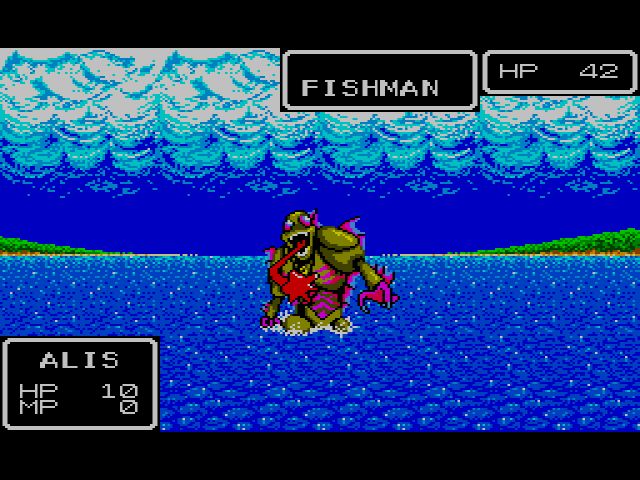 If there were any justice in the world the Phantasy Star series would be held up in the same light as Dragon Quest and Final Fantasy. As the quintessential sci-fi RPGs of the era Phantasy Star was the opposite of its two main competitors, going for an anime infused brand of science fiction rather than the typical swords and sorcery motif popular at the time. These days the brand is carried on by the Phantasy Star Online run of MMOs but once upon a time they were single player RPGs every bit the equal of Square Enix’s offerings and in the case of the first game vastly superior.

The Algol star system is composed of three planets, all ruled by King Lassic. Lassic was once a fair and just king but suddenly became a tyrant who ruthlessly killed any who opposed his rule. Pockets of rebellion spring up throughout the Algol system but are cut down, and one such group was led by Nero. Nero is slain by Lassics forces (who resemble Stormtroopers) in front of his sister Alis who vows revenge.

Phantasy Star was a victim of circumstance. Released in 1988 for the Sega Master System it predated the US release of both Dragon Warrior and Final Fantasy by 1 & 2 years respectively. If you were to compare the three games side by side Phantasy Star might as well have been a SNES game in comparison. The game was light years ahead not just in presentation but gameplay as well.

Unfortunately this was an era in which Nintendo ruled the market with well over 90% market share so its release went unnoticed. The $80-90 price tag also didn’t do it any favors. Phantasy Star would go on to become one of the greatest unsung heroes of the time, respected by those fortunate enough to play it at release. In the decades since then it has finally gained the respect it deserves and is one of the best retro RPGs, no games period that I’m honored to have played at release.

First of all the graphics are insane. When taken as a whole Phantasy Star might have been the most impressive 8-bit game of all time. Although the overworld graphics are the same chibi sprites we were accustomed to they served their purpose. The overworld has a surprising amount of animation, from waves crashing against the shore to scores of ant lions with pincers gnashing in wait.

The first person battles feature full attack animations, all excellently rendered. Every enemy from the lowly slimes to the massive Octopi and vampires were brought to life through great art and animation. This was a feature that Final Fantasy would not incorporate until its seventh installment; Dragon Quest lagged behind until the sixth. The battles featured location specific backgrounds as well. The number of little touches like these went a long way toward bringing this sci-fi universe to life.

Perhaps its most well-known attribute are the 3d dungeons. Like Wizardry and Might and Magic before it dungeons are explored from the first person but Phantasy Star was leagues ahead of those games with its smooth scrolling. It was a major technical accomplishment back then and is still impressive to this day.

Phantasy Star broke ground by having a female protagonist with Alis. At a time where when most games were content to put you behind the gun of a Stallone or Schwarzenegger knockoff this was a bold move but you’ll quickly forget about that once the game starts. PS mixes sci-fi with traditional swords and sorcery elements to create a universe that was decidedly unique for the time. What is most impressive about the game is its scale; this is an adventure that plays out across three entire planets with their own separate towns and dungeons to explore. The closest comparison at the time would be Ultima IV but that game was just plain weird.

Although you begin the journey alone you’ll soon build a party of 4 characters who each bring something to the table. The cat/rabbit hybrid Myau is the fastest party member who requires next to no items to keep up with the rest of the group. While Odin might come across as the typical strongman of the group his biggest contribution is the ability to equip guns. Guns are not strong but hit every enemy each turn and inflict the exact same damage regardless of defense. Noah is the requisite magic user with little defense but strong magic to make up for it.

The first person battles are surprisingly speedy initially as you’ll only face one or two enemies when alone. With each party member the game scales up to accommodate your increased offense, with groups of enemies reaching as many as 7-8 despite only one visible on screen. A unique feature of the game is the ability to talk to humanoid characters and possibly avoid battle altogether. This would go on to be a key feature of the Megami Tensei series but Phantasy Star did it first.

In spite of the battle scaling Phantasy Star is still one of the hardest RPGs of all time. RPGs created in the 80s were typically grind heavy as developers had no base to scale from but even taking that into account Phantasy Star exemplifies why the genre was so niche for many years. Equipment is expensive and meseta does not increase exponentially to keep up. Once you have a full party more than likely someone will have to make do with hand me downs or you’ll have to spend hours grinding to equip them.

It’s a vicious cycle as you need better gear to defeat more powerful opponents but you need to kill those same stronger enemies for the money to buy said equipment. Groups of 8 enemies are quite common and slow down battles due to the animation. Aside from weapons and armor there are numerous vehicles that are mandatory to progress that have to be bought and are insanely expensive, once again grinding the game to a halt.

These balance problems come to a head in the game’s punishing dungeons. The first few are simple single floor affairs that are easy to navigate but the game quickly descends into 6-12 level monstrosities that require mapping to survive. Because every wall is exactly the same I can guarantee you’ll get lost. The ability to save anywhere might actually screw you rather than help; if you save in the middle of a dungeon with little supplies chances are you’ll have to die and lose half your money to progress.

Even in spite of these old flaws I would recommend Phantasy Star in a heartbeat. There are few RPGs from that era that stood the test of time but Phantasy Star has the advantage of being ahead of the curve in terms of features and presentation. Sega created a brilliant series that has endured the ages, why not see where it all started?