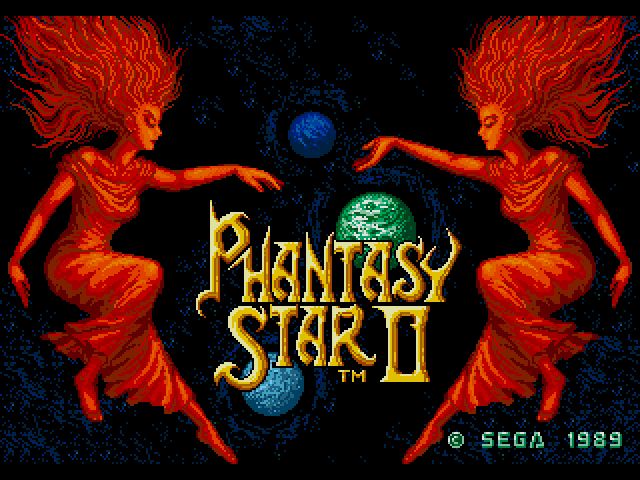 I count myself truly blessed to have been able to play Phantasy Star not long after its original release and experience just how far above it was from its contemporaries, Dragon Warrior and Final Fantasy. In a fair world it would have received the recognition it deserved but alas. A year later Sega would deliver a sequel that in my eyes became the quintessential sci-fi RPG for its time. As the first 16-bit RPG released Phantasy Star 2 is everything a sequel should be with improvements in every category. With it comes a level of difficulty that I don’t think most gamers of today are ready to handle but that does little to detract from the excellence at hand.

1000 years have passed in the Algol system and its inhabitants enjoy peace under the governorship of the Mother Brain computer. Mother Brain regulates the weather and all other facets of life for its inhabitants but recently something has been off. At the same time a young man named Rolf is suffering from nightmares of a maiden fighting an ancient evil. Little does he know that the two are linked and his quest for the truth will have dire consequences for every planet in Algol.

What a difference a year makes. Phantasy Star was definitely ahead of its time with its features and story and that continues in its sequel. Phantasy Star 2 has an extensive plot that deals with some pretty heavy topics such as suicide, terrorism, and mass destruction of life years before other such games would deign to go there. It’s a sprawling tale that will once again see you visit other planets to solve the mysteries at hand and is heavily character driven, although not in the way you expect.

Where Final Fantasy and Dragon Warrior’s characters at the time were mostly blank slates used to fulfill a role Phantasy Star’s heroes are an eclectic bunch. Rather than a set of battle hardened veterans you’ll encounter in the field each of the game’s six protagonists aside from Rolf and Nei will actually come seeking you out as they hear tales of your exploits. These members are ordinary citizens who have been inspired by your heroism and their “class” is actually the job they perform in their day to day life. Sure it’s convenient that Anna is a hunter who tracks renegade hunters so she kicks ass but even unlikely characters such as Kain (a wrecker good against robots) and Amy (a medic) will have their uses.

This follows traditional RPG mechanics so you’ll spend lots of time visiting towns upgrading equipment, speaking to townspeople, and grinding for experience. The battle system has seen the most changes since you no longer fight a single enemy type in each battle. Enemy parties are comprised of an assortment of biomonsters and later cyborgs in many configurations. You can now choose to auto battle and target specific enemy groups though you still can’t focus on one target. You’ll also notice that battles take place on a static grid rather than the beautiful location specific backdrops of the original. It sucks but sometimes you can’t have everything.

The hellish first person dungeons of the first game have been replaced by the standard overhead view maps of most RPGs but before you celebrate know this; these are just as nightmarish. These dungeons can reach as high as thirteen floors deep and aside from confusing layouts full of dead ends will also have pit traps and holes that you actually have to fall into at the right angle and position to continue onward. Imagine climbing to the sixth floor of a lab and falling into a hole only to realize you weren’t on the right side and have to do it all over again. Doesn’t sound too pleasant does it?

Make no mistake, Phantasy Star 2 is one of the most difficult RPGs you’ll ever encounter, full of all the excesses and trappings old school RPGs were subject to. The grind is heavy with this one and even the basic enemies at the start of the game can be vicious; I wouldn’t move more than a few inches away from the first city until I’d reached level 3 or 4 just as an example. New equipment is expensive and the rewards from battle aren’t proportional so be prepared to fight a lot. Which is going to happen anyway as the encounter rate is really bad. It’s not an exaggeration when I say nearly any random battle can be fatal within a dungeon, especially when magic users are involved. Nearly every RPG has its fair share of grinding but it borders on tedium here. Bottom line, you are going to see the game over screen a lot.

The game’s high challenge was apparently evident at Sega and so the game came packaged with a mini strategy guide that took you through the whole game and had full maps of every location. It also showed you how to obtain some of the most useful items in the game such as the Visiphone, which allows you to save anywhere. Some people bitched and moaned about its inclusion; ignore them they’re stupid. It doesn’t break the game and only barely alleviates some of the difficulty.

The art direction of the series underwent a massive shift, abandoning the fantasy meets sci-fi look for a 100% futuristic art style. And it works.   The art is highly evocative of 80s anime with multi-colored hair and a definite cyberpunk vibe. It’s so drastically different from everything else at the time that it stands out. The first person dungeons are missed as they were a technical achievement; the foreground overlays might look cool but the overhead view doesn’t really lend itself to exciting vistas. The battle graphics have been significantly improved with excellent animation and spell effects making up for the static background.

The difficulty is off putting however Phantasy Star 2 has so many other factors working in its favor that it is worth sticking it out. We’re close to 25 years since its original release and their still isn’t much like it on any console. There’s a reason this is commonly placed on many best of all time lists and I urge everyone to give it a try to find out why.