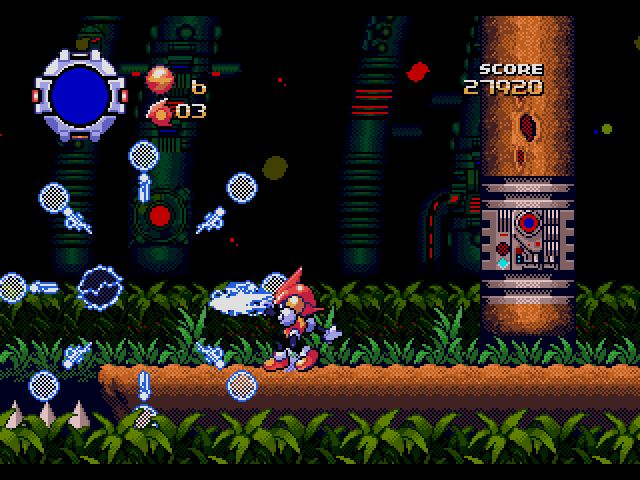 I really love seeing the period at the end of a console generation when developers have more or less fully tapped each system’s potential and can produce truly phenomenal games. Donkey Kong Country 2 is one of my favorite platformers of all time; Resident Evil 4 might be in my personal top 10 games list and who could ever have imagined God of War 2 could be squeezed out of the PS2? Pulseman like Ristar and Vectorman was both creative and technically brilliant, the type of game that comes from years of working with the same hardware. While it only came to the states in a limited fashion that is no longer a barrier to anyone seeking one of the best 16-bit platformers ever made.

The story certainly is something else. In the future Doc Yoshiyama created the world’s most advanced AI, dubbing it C-Life. The C-Life was so advanced the good doctor fell in love with it and uploaded himself unto the internet so they could be together. Through unknown means the two combine their DNA and Pulseman is born. Unfortunately Yoshiyama becomes corrupted after so many years in the digital world and comes back to Earth as the evil Waruyama, ready to conquer the world with his Galaxy Gang. As the only being who can travel between both worlds freely it is up to Pulseman to stop his father.

As much as I love Pokémon I have to admit I miss seeing developer Game Freak put their unique spin on the platforming genre. Nearly every time they have stepped outside that monster brilliance has followed; HarmoKnight is excellent and 2005’s Drill Dozer might be the most underrated Gameboy Advance game ever. Pulseman was only released through the Sega Channel meaning very few had the chance to sample its innovative gameplay. There is a fan translation but that is completely unnecessary as the game was completely in English anyway. With its Virtual Console release now is the time to discover why Game Freak is a force to be reckoned with.

Obviously the game is all about manipulating electricity and as such Pulseman is armed with a wide array of abilities. Your basic punches and kicks are lightning infused but that is not all. By building up a little speed you will create a static charge which can be discharged as a pulse arrow. The distance needed for this is incredibly small and if need be double tapping left or right will accomplish the same. More importantly however that charge is used to power your Volteccer ability.

The Volteccer forms a large crux of the game. Jumping into the air while holding a charge and pressing A will change you into a bolt of lightning that will fly through the air briefly. More importantly however smacking a wall will see you bounce around like a pinball, able to smash through walls and blocks. Tapping A next to a power line will also transform you into a bolt of lightning and allow you to “ride” it across distances. Needless to say the Volteccer is used heavily throughout the game in a large variety of ways that are insanely fun. I would say it is akin to Sonic’s speed or Ristar’s arms.

In many ways Pulseman does remind me of Sonic the Hedgehog. Not the speed aspect but the way in which the game delights in coming up with new ways for you to use your abilities. Almost every level introduces some new mechanic, whether it is zipping along a massive network of power lines, using your momentum in Volteccer form to smash bricks and squeeze through tight spaces or figuring out how to clear simple platforming challenges amidst a level of electricity cancelling water. That variety is the life blood of the game and never stops all the way up to the game’s conclusion. Sometimes the creative level design can be a bit too clever for its own good as you struggle to squeeze into a small gap or have to make blind leaps of faith yet the designers have kept these instances to a minimum. At seven stages with multiple sub levels the game is the perfect length but is so good you’ll still want more.

And the difficulty curve is perfect! Since you can only take 3 hits you have to be a bit careful as life restoring hearts aren’t in great supply. As a whole the worlds aren’t full of fodder enemies as the game would rather challenge you to apply your powers in navigating the levels instead. Yet it is still easy to run headlong into enemies or spikes if you try to treat this like Sega’s other IP. The boss battles are highly creative and offer up their own unique twists on the standard platforming formula. By the end of the game you’ll probably start to blow through the stock of extra lives you will have no doubt built up yet it always seems fair.

The production values here are absolutely stellar. Ken Sugimori’s art direction has created a world bubbling with personality, whether it is the real world or cyberspace. All of the characters have very likable designs and Pokemon fans will notice all kinds of references to this game. Character sprites are large and have a more “grown” up appearance than most of Sugimori’s other work yet still remain appealing. This is an incredibly colorful title, more so than most games on the system and while it doesn’t make a push for out there special effects the art design, especially of the virtual worlds is fantastic. The electronica soundtrack makes excellent use of the system’s FM synth to deliver a score that is mechanical in feel and matches the half real world/half internet action. There’s even a decent amount of voice clips, surprisingly all in English with subtitles!

This truly has it all. Pulseman is not just a great game but one of the best platformers of that era. We truly missed out on an exceptional title. At least initially. Thanks to its re-release on the Virtual Console in 2009 gamers around the world can see that Game Freak are more than just a Pokémon factory. Buy this game.