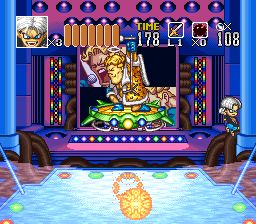 Go Go Ackman was something of a surprise for me. Much like in the rest of the world licensed manga and anime games are usually garbage in Japan yet GGA bucked that trend and was a surprisingly well done platformer. Especially considering the manga is only about 60 pages long and mostly consisted of disparate short stories. So imagine my disappointment when the sequel turned out bad. While it appears to be more of the same great platforming you loved originally there are plenty of small flaws that make Go Go Ackman 2 fail to live up to the modest standard of the first game.

Just like its predecessor Go Go Ackman 2 has the same silly sense of humor. After his humiliating defeat at the hands of Ackman the angel Tenshi enlists the aid of the Metal Angels, an angelic rock band. That doesn’t sound so out of the ordinary except the band contains Elvis Presley and Jimi Hendrix as their members! The ridiculous story is one of the game’s best aspects as the antagonists are incredibly funny in their look and attacks. The Metal Angels definitely fit the tone established by the manga and are indicative of just how sound the manga’s premise is. Now if only they were in a better game.

The first was an enjoyable romp if a bit simple and the sequel aims to rectify that by adding some depth. Someone recognized the absurdity of having a sword strapped to your back that you can only use sometimes as you can now use it anytime with its own dedicated button. This leaves melee attacks on a separate button and the distinction is important for reasons I’ll get into shortly. The boomerang and gun return but are far too weak and limited in their actions to be worth using. Weapons can be temporarily upgraded to a second and third level but items are so sparse you’ll rarely get the chance to see these in action.

Where it succeeds in some ways it largely fails in others. A number of hand to hand moves have been added but they are largely irrelevant because they don’t work. There’s a melee rush attack that I still don’t know how to activate consistently. You can catch enemies in midair and throw them but outside of one boss battle it is never needed. Besides why risk taking a hit when a simple sword slash can do the same? Luckily you can completely ignore all of these additions and play the game exactly like the first.

For all of the game’s similarities to its predecessor there’s been a step back in its controls. The controls are not as responsive this time around which makes no damn sense in my opinion. Most of the issues lie with using weapons. There’s a delay when using weapons and sometimes your actions won’t perform at all. I would say 80% of the time it works fine but it’s that 20% that is incredibly annoying, to the point where you’ll simply use your fists and feet during boss battles.

The level design is less interesting this time around which is honestly a shame. The stages are much shorter and seem designed to herd you toward the next boss battle rather than provide nooks and crannies for you to explore for items. In fact there are far less items lying around in general which defeats the purpose of the expanded weapon system. The boss battles themselves have become a bit more elaborate and complex with a few that might actually make you sweat this time. Despite that however this is an incredibly easy game.

Possibly the game’s biggest crime though is that it is way too short. I hate to constantly compare it to the first game but it can’t be helped. The original was a good length at seven levels with multiple sub stages that made it feel like a complete experience. But at five measly levels the game is over far too quickly. All of the new additions to the game have no time to be fully explored as a result leaving the game feeling as though it was put out as quickly as possible to capitalize on the first game’s popularity. If true it shows as the game seems to lack the free spirit of that game and seems like a by the numbers sequel.

Out of the three Go Go Ackman games this second installment is definitely the weakest. With its short length, wonky controls, and lacking content there is no reason to bother with this game and I say that as someone who actually likes certain aspects of it. The fact that the third game was released a mere 5 months later also shows that the developers were disappointed with it as well. Your money is better spent elsewhere.