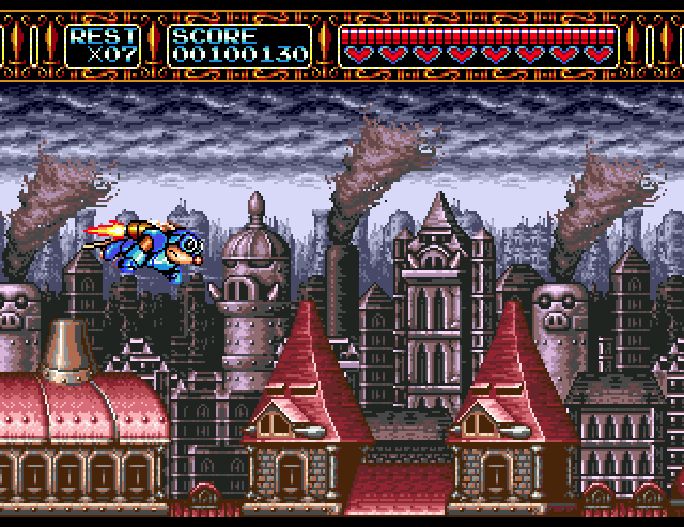 The great mascot platformer rush of the early 90s was really a sight to behold.  Mario and Sonic were king of the roost, and still are (well one of them is) and like sharks that smell blood in the water every publisher wanted in.  This led to a really horrible glut of generic platformers starring animals you didn’t even know existed.  No animal was safe as developers tried anything they could to get a piece of that pie.  The vast majority of these games were truly terrible but there were some that managed to rise above the sea of crap, with this Rocket Knight Adventure arguably being one of the best.

I remember seeing ads for the game in Gamepro and wrote it off, lumping it in the same category as Awesome Possum, that other game that starred an opossum who was anything but what his name suggested.

Anyway I finally did get around to it when out of boredom I perused a friend’s Genesis collection and after being disappointed that he had a Battletoads case with no game inside, settled on RKA.  God’s honest truth I really wish I could go back in time and slap myself for dismissing it so casually.

Rocket Knight Adventure like Bionic Commando is built entirely on a gameplay “gimmick”, in this case your rocket pack.  After a short charge it can be used for a variety of purposes, the main one being to blast off in nearly any direction or rebound off walls.  The levels are filled to the brim with secrets that the designers almost dare you to try and find many involving creative use of your rocket pack.  Rocket boost is also used to enhance your attack, with a full charge granting a spinning attack or a straight thrust attack to take out a line of enemies.  There’s equal parts risk and reward involved in using it to attack; it’s safer to boost and attack, but the damage is weaker than a full sword slash.  Half the fun in the game is seeing what crazy shit you can do while flying around the levels, and Konami were very much aware of that with items to collect at every turn.

The level design is absolutely phenomenal and introduces new mechanics routinely.  A lot of developers would shoot their load (so to speak) in the first few levels to wow you initially and then cruise control the last few stages.  But here there’s a very tangible feeling of building up to the final confrontation with every level raising the scale.   Some levels will are free flying like a shooter and then the game will change to a game of rock ‘em sock ‘em robots as you pilot a mech in a battle against your rival Axel Gear.  I like to use the term a festival of play mechanics to describe the game and it fits.

Visually the game stands out for a number of reasons.   Beyond just the depth and breadth of backgrounds the game takes you through, everything is animated exceptionally.  All of the world’s inhabitants are imbued with a sense of character down to the minor enemies that you face.  Standard pigs lose their armor when hit, mechanical bosses break down into individual parts when defeated and there are tons of background activity you could easily miss.  Konami even threw in that reflection effect they seemed so fond of in their Genesis games but at least it serves a gameplay purpose here.

Bosses are made up of multiple sprites for even more impressive animation, well for the time at least.  There are no cut-scenes or dialogue but just through character actions and facial expressions, especially from Sparkster himself you “get” the characters.  Rather than a random set of the typical themed levels most platformers are cursed with Konami built a plausible world for the characters to inhabit.  The game even shines in the music department but not to the same level as the graphics.

The many faces of Sparkster.  Such a well animated character, right up there with Sonic.

Rocket Knight Adventures is decently long and provides a slight challenge on normal, but to see the true ending you’ll need to finish it on hard which only gives you 1 life and no continues.  And the game is worth it.  Not only one of the Genesis’ best but also one of the finest 2-d platformers ever conceived.