What we have here is a perfect example of the launch effect. Many companies make it a point to have a game ready for the launch of a new system, sometimes stooping as low as porting an old game just to have something there. The theory is that the early adopters are the hardcore who will buy almost anything to show off their new console. And it pretty much works. New franchises are a prime example of this, one which Enix of America was keen to take advantage of with this beauty.

My first exposure to Actraiser came via the August 1991 issue of Nintendo Power.  This issue was given to me by a friend and was my first time actually seeing SNES screenshots.  I read that issue so many times the cover is completely torn off. The Super Mario World blowout was awesome enough, but the feature on Actraiser really stood out to me.  A God sim mixed with an action platformer? The idea seems ludicrous but developer Quintet does an excellent job blending the two to make the sum greater than the whole.

After a brief story synopsis you are thrust into your first action stage. The world is broken up into 6 regions, each featuring 2 action levels at the beginning and end.  Truthfully the side scrolling stages are the games weaker area. There’s nothing wrong with them per se it’s just that as a whole they are a bit bland. Your offense consists of attack, jump, and magic which  is selected before descending into the world. Most stages are a straight left to right jaunt but the later levels offer branching paths to break things up. 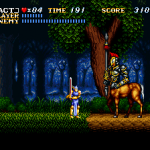 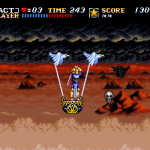 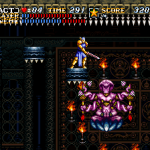 The graphics are a mixed bag, at times both spectacular and underwhelming at the same time.  A lot of the backgrounds are beautifully drawn but there are long stretches set against flat environments which frankly reminds me of a TG-16 game. The bosses were impressive for the time considering we were accustomed to 8-bit sprites for so many years and sport some interesting designs and easily discernible attack patterns.  These areas aren’t really hard and once you acquire a certain magic spell even the boss fights become trivial.  The action levels I feel mostly serve as a framework for each region; they start and end each and your score impacts the simulation portions.

The soundtrack is absolutely outstanding and is even more impressive than the graphics. During the 16-bit generation composer Yuzo Koshiro was a force to be reckoned with on all 3 consoles of that era and Actraiser is a sheer delight right from the title screen. The SNES sound chip is given a thorough work out pumping out the symphonic tunes; the clarity and quality of the music was unrivaled up to that point.  While some of the instruments used are tinny and low quality (the horns especially) the compositions are timeless.

The sim portions of the game are where Actraiser really shines. Here you control an angel like avatar as you protect and nurture the population of each country. You begin with 2 followers who will advise you of what the people need, any troubles that may arise, and when certain events occur.  You are provided with a large assortment of spells that command nature to change the landscape and create a suitable environment to help the population grow.

Every region has monster lairs which produce different monsters that go after specific targets. These lairs are the main targets for where you’ll grow your cities, as the people destroy them when instructed, saving you the trouble of killing all 100+ plus monsters inside each individually. The game can become very visceral in the larger zones as you’ll have to choose a direction for growth while also making sure monsters don’t kidnap villagers or destroy their homes and crops. The people will give you offerings as time elapses, some you can use to benefit yourself but most of them are for the side scrolling stages. There’s even a devious element to the game in that as the civilization level rises, the people learn to build better homes. To max out the population, you can destroy all of the old homes and then rebuild since the better housing can hold more people in each building.  Also each country will establish its own distinct look.

Housing starts simple, in this case tents.  Once your civilization level rises, they’ll build houses instead.     Causing an earthquake takes out the tents and leaves only the houses.  After a little urban renewal, now all of the buildings are replaced by houses.  Plus the people now grow wheat fields to feed more people per capita.

Your progress can be observed at any point by going back to the Sky Palace and zooming out; the over world map shows each town exactly as it was built, down to the burnt out buildings.  I could go on and on about the sim aspect of the game.  Each region has a particular climate which dictates which powers you’ll use to clear a path or promote growth.  I also like the steady progression of enemies that you fight from one country to the next.  The simple bats and blue demons soon escalates to red demons and skulls, who if left alone too long will cause an earthquake that will decimate your towns.

The progress made in these segments directly impacts the action areas. Your magic spells are found by the people and given as offerings and your level and hp increases as the overall population hits certain milestones.  To prevent camping until you’ve maxed out each zone a disaster will strike each town that can only be alleviated by an item indigenous to another area.  Using offerings from one section to cure another gives the entire world a sense of “unity” for lack of a better word.
If I were to grade both parts of Actraiser separately, the sim parts would be a 9 but the side scrolling levels a 7 making the overall game an 8. The sim parts still shine but time has revealed the flaw in the game’s other half. But it still remains a game that is worth anyone’s time.