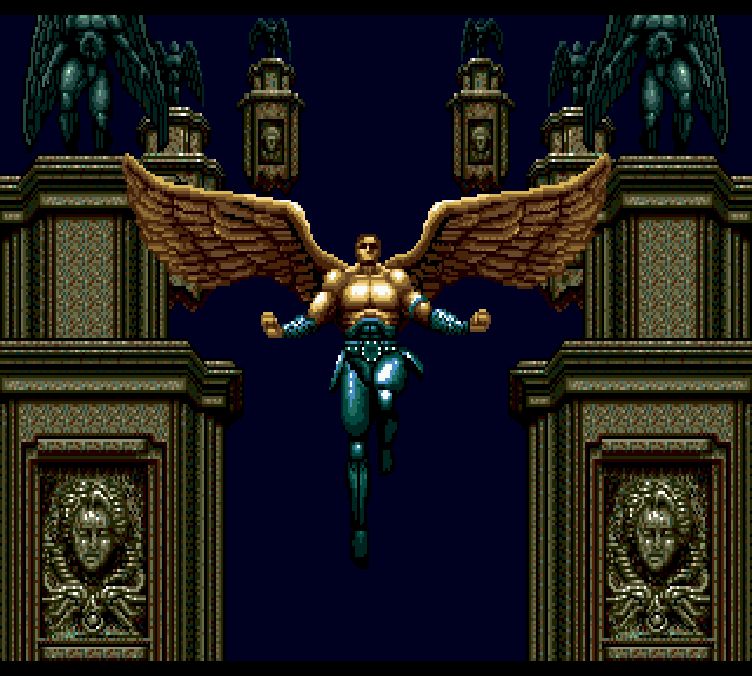 Much like today in the 16-bit era there was a deluge of shooters. But not the kind of shooters you’re thinking of. No, I’m speaking of shoot em ups, or the more popular phrase shmups. You couldn’t turn your head without bumping into a shooter, they were everywhere.  Every console, arcade, and computer had em, you could find them holding up wobbly tables there were so many.  As such it was easy to get lost in the crowd which is happened to this gem.  Which is a shame as Wings of Wor is a fantastic game.

Wings of Wor finds you on the planet Iccus, where a virus has run rampant and mutated the population into monsters.  You control Wor, a winged warrior sent to destroy the monsters once and for all.  Let’s be completely honest, that was probably written up by some greasy marketer or PR person to fill the instruction manual.  It doesn’t make a lick of difference in the end as story is the last thing that will be on your mind.

The game spans 6 levels broken up into 2 segments each. Your sojourn through the planet Iccus will take you from the darkest reaches of a cavern to the ocean depths and even to the heavens above. All manner of flying beasts are literally thrown in droves as you progress through the stages. The game has a very unique visual style to the enemies.  Most consist of a combination of organic life mixed with industrial level technology.  This is most evident in the bosses, giant screen filling monstrosities that in some cases you won’t know what to make of.  These mayors are the game’s highlight graphically; they occupy the entire screen and then some, scrolling to reveal another section of their body just when you think you have them beat.

The color palette for the game is very dark and plays to the Genesis’ strengths.  In some respects you could say the darker colors chosen better represent the planet being corrupted.  Each level has its own unique visual scheme to differentiate it from the last.  The soundtrack is generally excellent. I hate the Genesis sound chip but on occasion there are games that are able to transcend its limitations and this is one of them.  Each level has its own theme, with this extending to the second halves of the stages too.  The sound effects could have used a bit more punch in my opinion.  The loudest sound effect comes from enemies being destroyed, it drowns out everything else and tends to be a bit obnoxious.  Most of the rest however are too muted.

To combat the onslaught of enemies you are given a menagerie of weapons. Like almost all shooters you can collect a power-up to boost movement speed, in this case a feather. Your standard cannon is upgraded by orbs separated into 3 categories. Blue Orbs increase the range and amount of bullets you fire, Red Orbs increase the size and power of your shots. A meter shows what level the two are on, with the goal being to reach the highest level as soon as possible; the mobs are relentless. The rare Yellow (Amber? Gold?) Orb will divide your firepower and allow you to fire backwards as well. Generally when it appears it’s because you’ll need it.

Adding further depth to the combat, you will also pick up scrolls with different letters for a variety of effects. You can store up to 3 at a time and they all last for varying durations. You can’t select which scroll you want to use; the first in the list will always be used.  Not mentioned in the manual is the ability to increase a scrolls power and duration by having 2 or more of the same kind.  Which scrolls appear is completely random with some exceptions.  This seems a bit like overkill but in some respects it’s needed; the game can be unfairly hard at times.

You’ll barely have any time to stop and breathe as the swarms of enemies attack in rapid succession.  Your bullet spread will cover a good 50% of the screen and its necessary, you will never take your finger off that trigger.  The problem with this is the enemy bullets are incredibly small and blend in with your shots a little too perfectly, meaning you will die a lot of times without realizing how.  Your current weapon level is dropped by one when this happens, which isn’t too debilitating.

The bosses border on bullet hell before the term was coined.  This combined with the bullet issue I mentioned makes some of them incredibly cheap.  The default difficulty is set to easy which lessens all of this; I recommend going straight to normal. You can crank it up to hyper if you really want a challenge.

Among the shmup genre Wings of Wor is definitely unique. I can’t really think of any other game that shares a similar motif.  Its decently long, has impressive graphics and is challenging.  Overall the game still holds up and will leave an impression long after the credits roll.