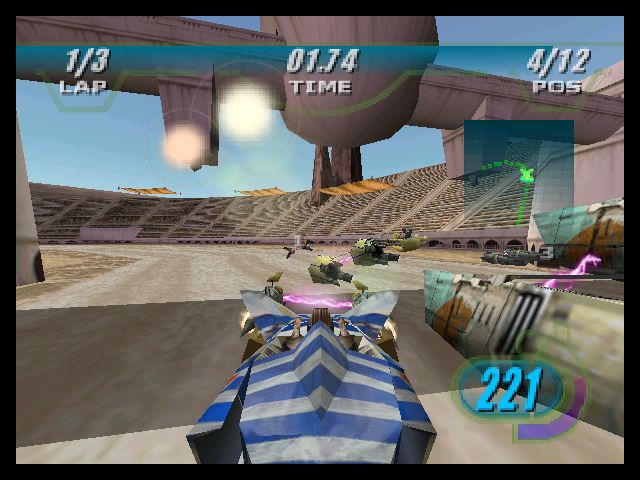 When the Star Wars: Episode One video game adaptations were announced I’ll admit, I was disappointed that the N64 would be “saddled” with just a pod racing game, especially in light of the PlayStation receiving the action game I thought I was looking for. The Nintendo 64 sure as hell did not need another racing game and even one based on arguably the best segment in the Phantom Menace elicited no excitement on my part. But after seeing how the Phantom Menace on PS One turned out maybe a pod racing game wasn’t so bad after all. Episode One Racer is a solid racing game that manages to recapture some of the thrills of the movie but isn’t entirely successful in that regard. While flawed it is still far better than the majority of the racing games on the system.

The game’s tournament mode is less of a contest to see who is the best and more of an outlet for gambling. Obviously coming in first will reward the most cash but you can also take a gamble and bet double or nothing or winner takes all to earn even more cash. Your earnings will be spent upgrading the various aspects of your craft which all have a tangible impact on performance. There are even a few options to purchase new gear; if the shop is too expensive you can always visit the junkyard. Sure the parts aren’t the greatest but if you completely suck at the game you can still buy welfare upgrades. With 3 divisions and plenty of excellently designed tracks within each you’ll have plenty of chances to rack up the money needed to eventually unlock the game’s hidden pilots like Sebulba and access the last four truly great tracks.

The dual turbine engines give the pod racers a unique feel separate from other racing games for the most part. The closest comparison would be Wipeout except the controls here are tighter for the most part and the game isn’t as punishing. The sense of speed is truly incredible and recaptures the visceral thrill of the film perfectly except you are behind the controls. The game is very user friendly so newcomers can pick it up and win a few races before it starts to get real. I like the feel of the controls for the most part but at the game’s highest levels it can’t keep up with the speed. Even with the best upgrades I still found myself basically being rag dolled around corners and such. All of the available pilots have their stats and specialties that can possibly give them an advantage on certain tracks provided you know how to adjust.

What kind of ruins the game is the relative ease with which you can plow through the majority of its content. Anakin is an above average pod racer whose beginning stats dwarf nearly every other competitors by a wide margin. With him in the cockpit you have room for errors as crashing and burning poses little drawback since you can easily catch up by the final lap. It isn’t until the game’s final circuits that the difficulty ramps up significantly and that comes more from confusing track design than anything else. For even the most casual of racing fans most of the game’s content can be unlocked within a few hours, killing its longevity.

Visually the game is incredibly pretty and perfectly recaptures the speed and visceral sense of danger presented in the movie. Each of the game’s numerous planets has its own track with varying weather and terrain that really heightens the visual presentation. In the film the lone race took place on Tatooine yet the game manages to create tracks that wouldn’t have looked out of place in the movie through clever art design. These worlds feel alive as there are trams and other flying ships taking off and flying within the backgrounds; a cool touch. The draw distance is pretty far with pop-in hidden through constant tunnels, hills and turns. The game makes use of the Ram expansion for a high resolution mode and thankfully the frame rate does not take too big of a hit, with the game still playable even by today’s standards.

Sound is the one area that I found lacking. The music as you race is so muted it is almost non-existent with the focus squarely put on the engine sounds and various taunts and exclamations from rival racers. These sound effects and voice clips are sharp and do mimic the film but don’t make up for the sound track barely even being there. It is only during the final lap that music picks up in tempo to add some tension to the race. This is a huge blow and comes across as uncharacteristic; nearly every Star Wars game has had an incredible score so to see this aspect of the game seemingly half assed is weird.

The games accessibility may turn off racing veterans however there is still a wealth of content to explore and unlock in what is undoubtedly the best game based off the movie. It doesn’t hit all of its marks and is a better single player game than multiplayer but it is certainly worth your time.