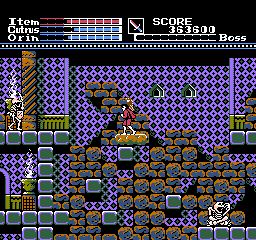 You know for some strange reason I really wanted to play 8 Eyes.   Fresh off the Guardian Legend (awesome game go play it now) I saw an advertisement for it in one of my comic books and the flowery ad copy hooked me.  Dual Attack Mode!  You can control a falcon and a dude at the same time!  And it looks like Castlevania!  Now it could be argued that any game would be doomed against the lofty expectations of a 10 year old but let’s be honest, it didn’t take much to impress us back then.  Some of us were still eating glue at that point and were willing to play shit games like Dr. Chaos if truly bored.  Even taking that into consideration 8 Eyes is a failure of the worst degree.

In the distant future nuclear war has ravaged the planet and mankind has begun to rebuild under the leadership of the Great King.  With his 8 jewels, also known as the 8 eyes and their mysterious power things are proceeding well until the King’s 8 (how convenient) Dukes steal the Eyes in a bid for power.   With the world teetering on collapse once again Orin the Falconer is sent to stop them.

With its similarities to Castlevania you would expect an action packed adventure of the highest order however 8 Eyes lacks even an ounce of that game’s polish.  Nearly every feature it cribs from other classic adventures has been half-assed; leaving a boring and unplayable mess that fails to capitalize on the finer aspects of the games it draws inspiration from.

As Orin you are equipped with a sword and can pick up a large assortment of sub weapons like the Boomerang, Daggers, Ice Ball, and a gun.  These weapons are powered by weapon energy which is built up by collecting the crosses dropped by enemies.  Your falcon Cutrus can be released at any time wherein he’ll fly back and forth to attack enemies and hit switches.  As a bonus a second player can control Cutrus for cooperative play and makes the game somewhat easier.  Somewhat.

What do you get when you combine Castlevania with a pinch of Mega Man?  A recipe for probably the greatest action game ever made for the NES right?  Well that sure as hell isn’t what you’ll get here.  As Orin your sword has pathetic range and pretty much every enemies reach far exceeds your own.  What this boils down to is a loss of large chunks of life during every exchange.  The sub weapons are powerful but building up your item meter takes far too long and it depletes quickly.  Cutrus is handy in some situations but he has a life bar of his own and when he’s gone you’re screwed.  There are some enemies that only he can kill as well as out of the way switches that he has to hit.  It wouldn’t be a problem if you could avoid combat in most cases but enemy placement says otherwise.

The Mega Man connection rears its head in a few ways.  You have your choice of 7 stages at the start and just like Mega Man you are awarded a new weapon at the completion of one.  The swords gained from each boss are strong against one of the other Dukes, just like Mega Man.  But the comparison falls apart at this point.

In Mega Man you could at least defeat the bosses with skill even if you didn’t have the appropriate Robot Master’s power.  Here you’ll be lucky if you can even lick the Duke’s boots if you even make it that far.  And it’s not as if the swords are noticeably better, they inflict twice as much damage to each boss, nothing more.  These issues force you to play the game in a very specific order, one that can only be ascertained by uncovering the ridiculously cryptic clues scattered in each level.  Seriously, they border on Simon’s Quest levels of abstract.

At the very least 8 Eyes is easy on the eyes.  The graphics are so reminiscent of Castlevania I wonder how the developers were never sued.   This is practically a sprite hack.  From the enemies to the blocks that form the levels, the only thing missing are the doors that separate each level segment.  While it is similar in style 8 Eyes lacks Konami’s artistic direction.  The color choices for each level are gaudy and drab and totally clash.  The sprite animation is impressive at the least, especially the 8 Dukes.

I’m not sure if the developers created 8 Eyes with the intention of ripping off/taking inspiration from Capcom and Konami’s classics but whatever the reason the execution falls flat.  There is the kernel of a good game buried underneath all of the problems I’ve mentioned but only a brain dead moron would stick around long enough to find it.   This is a failure in every sense of the word.