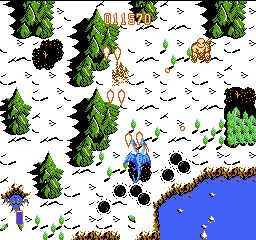 I’ve always liked Dragon Spirit.  As one of the first arcade machines that I put a lot of time in its left an indelible impression on me.  But I don’t hold it in high esteem simply for that reason; it’s also a good game.  The NES port has its differences from the arcade version but is still a good conversion considering the hardware.

The NES port is actually somewhat story heavy, earning it the sub title the New Legend.  Rather than the hero Amul you play as his son for this installment.  The short prologue in the beginning of the game is actually a gauge for how difficult the rest of the game will be; if you lose you are awarded the Gold Dragon form, essentially Easy Mode.  Although you are massively overpowered and can take 6 (6!) hits the game ends after 4 or 5 levels.  Win and you are the standard Blue Dragon with access to all 9 stages.  After every level you rescue a maiden who also fills in a bit more of the plot, such as it is.  Despite these additions the game is still a loose adaptation of the arcade game.

At 9 levels this is long by shooter standards.  No two levels are the same as they span a range of settings, from volcanic regions to dense forests.  Your dragon has a massive arsenal of powers at his disposal, with standard fire complemented by bombs to take out ground targets.  The power-ups take on numerous forms, the most common as multiple heads.  With up to 3 heads you are death dealing machine and can upgrade even further into different dragons.  New to the home port are two smaller dragons that function as options although this one is not common.  It’s a very extensive amount of power for a game that isn’t all that hard but the variety is much appreciated.

Although the levels are the same the layouts have seen many new additions.  New obstacles have been added to many levels, most notably the Jungle.  The Dark Zone towards the end of the game now simply flicks the lights on and off, giving you a brief window to see what’s ahead rather than the spotlight you were equipped with normally.  In the glacier level there is now a sped up segment in addition to the ice barriers that need to be destroyed.  Some of the later levels have been removed and in their place are castle levels meant to facilitate the final battle against Galda.  These levels are noticeably tougher than the rest of the game but break up the strong thematic variation of the rest of the game.  For those that wanted a 100% accurate port this is not it but retains most of the flavor of the arcade game.  You’ll either like it or hate it.

In terms of gameplay Dragon Spirit was made more forgiving.  The brutal hit detection has been lessened, partly due to the smaller size of your dragon.  Everything moves at a more brisk clip as well and power-ups practically rain from the sky.  Why they made that last change I don’t know as there are less enemies to kill overall.  The pacing is uneven now that I think about it; there are long periods of relentless assault followed by stretches of nothing.  Its an odd balance, almost as if the designers weren’t able to fully see what the changes would do the pace of the game overall.  As a whole however the game is far more manageable.

It isn’t as pretty as its big brother (the TG-16 version is more accurate) but still succeeds in delivering much of the same feel and at the same time adding enough content to make it different.  This is one of the better shooters released for the NES and it still holds up to this day.