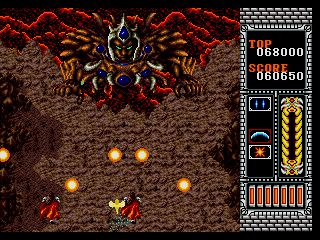 I’m pretty sure very few have played this great shmup.  Technosoft were no stranger to the genre and some would say they were the undisputed master during the 16-bit era.  This little known gem slipped under the radar somehow which is a shame considering its creator’s pedigree.  The Thunderforce series is legendary and while this does not reach such lofty heights it still manages to be an enjoyable experience all the same.

What is this, a shooter with a plot and cutscenes?  The evil king Gyra and his followers were sealed under the kingdom of Lorelei long ago.  That much power is too tempting to resist and it’s only a matter of time before someone covets it, in this case the sorcerer Aryaag.  Aryaag is attacked by Laden, the kingdom’s most powerful sorcerer only to reveal himself as Laden’s brother before banishing him.  And so the journey begins. Don’t get too caught up in the story, it’s there simply to set up the conflict but it is a nice touch.  Similar in style to Namco’s Phelios but much better in execution Elemental Master is one of the most enjoyable shooters around due to its balanced action and mechanics.

Laden isn’t exactly a powerhouse at the start.  You are armed with just a double pea shooter that is supplemented with additional elemental powers after each level.  More than just cosmetically different each has a different range and power and is useful in many situations.  The 3-way fire covers a wide range and has rapid fire while the fire spell is powerful but only travels in a straight line.  In addition each spell can be charged for a massive attack.  There isn’t much in the way of power-ups aside from health and mirror images that function like options.  However after your first level the fairy Neena will assist you and later on massively upgrade your standard shot.

The journey to gain the power of the elements allows you to choose your starting level from the 4 elemental planes.  The corresponding element informs some of the hazards you’ll face as you progress through each level, culminating in a battle against one of Gyra’s generals.  Because you’re on foot even the terrain poses a threat.  Enemies will assault you from all sides and contrasting other shooters you can turn around and fire behind you.  I wonder why every other shmup doesn’t let you do that.  Oh wait, I know, because intentionally gimping you is supposed to be intense.

The strongest aspect of Elemental Master is its level design.  Despite its status as an overhead shooter the choice to have all the action focused on the ground means the game can throw all manner of traps such as lava, falling rocks, and even spiked walls.  And the game does a brilliant job of tempting you with power-ups set in tricky spots that force you to consider risk versus reward.  With 7 levels and limited continues you’ll get some mileage out of this before seeing the credits roll.

There’s a ton on intricate little details in the immediate surroundings if you pay attention.  Tons of cast shadows, bubbling lava, and even water ripples from fish (or whatever the hell they are), it’s all there.  The dark art style suits the Genesis’ limited color palette well and the bosses are huge and lavishly detailed.  For a game originally released in 1990 it holds up pretty well.  The soundtrack as well is suitably gloomy to match the environments but still manages to be upbeat.

If there is one negative it would be that the game is a bit easy.  The limited continues might deter you somewhat but in the end Elemental Master will go down, sooner rather than later.  There’s a hidden option menu that will allow you to up the difficulty which introduces new enemies in the game but that life bar is generously long.  But even in spite of that I’d still recommend Elemental Master.  Like Magical Chase this is simply an enjoyable ride from beginning to end.