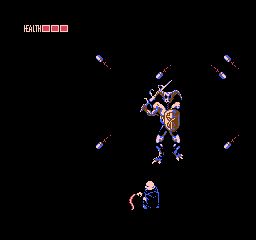 I hold a special contempt for this game for one main reason: it nearly ruined my thumbs with its shit gameplay.  Fester’s Quest isn’t a shooter but at times it certainly feels like one if you do not have a turbo controller, which I didn’t back in 1989.  Although it has aspirations of becoming a great adventure game like Zelda or Crystalis it falls far short of that goal due to gameplay balancing issues.

Uncle Fester is relaxing at home when aliens invade Addams Town.  Presumably as the only one who gives a damn Fester sets out to save the city, with the rest of the family chipping in to help along the way.  As premises go it’s enough to create a sprawling adventure and in that respect Fester’s Quest succeeds.  But in terms of actually enticing you into exploring its world Fester’s Quest fails.

Based on the comic strip created in 1938 the Addams Family has enjoyed a long string of mainstream success.  While most are unfamiliar or most likely not even aware of the comics the 1977 TV show and movie adaptations from the 1990s kept the property alive in the public consciousness.  Uncle Fester was not the star but is certainly one of the most memorable members of the family which says a lot considering there’s a hand with a mind of its own and a god damn Frankenstein as a butler.  So it stands to reason that he would make a good protagonist for a video game.  If only it were true.

At first glance Fester’s Quest resembles the overhead portions of Blaster Master and I wouldn’t be surprised if it were built using the same technology.  Many of the enemies are the same and a sizable chunk of the tiles used to build the maps have been lifted from Blaster Master.  You can’t blame them for using a proven engine, Gremlins 2 would also follow suit.  It at least gave the game a good base to start from and is the main reason Fester’s Quest is still a decent game despite its issues.

The standard gun can be upgraded up to 8 levels, like that game and its appearance is eerily similar.  Later on a whip is obtained, granting longer reach, more power, and making the game somewhat bearable.  There is a decent sized inventory of items built up over the course of the game, with the only mandatory items including light bulbs, keys, and the money used to refill health.  The secondary weapons like TNT, invisibility (should have been invincibility) potions, missiles, and the Noose are obtained from the family members you can visit.

Although the game is played primarily from an overhead perspective entering any of the houses scattered around the landscape will call up a first-person maze reminiscent of Phantasy Star and Wizardry.  Unlike those games there are no enemies and each is relatively short, serving only as a brief respite before the boss battles, which go back to the original viewpoint.  The ultimate goal of the game is to defeat the bosses, assemble the clues they leave behind and rescue Gomez.   While Fester’s Quest isn’t too long overall the chances of you bothering to complete it are slim due to its gameplay flaws.

The main issue is that Fester is not designed to handle the obstacles thrown in his path.  Most enemies are significantly faster than you and a surprising amount will cause you to move even slower, which can only be removed by vice grips which are in short supply.  The various sewers and caves you explore are composed of 90% tight spaces that make your weapons useless until you receive the whip.   Nearly every gun upgrade causes your bullets to fly in an arc and the narrow walls mean you will nearly always miss.  Compounding this, the enemies respawn infinitely; every time you back up to create enough space for your stupid bullets to hit enemies you’ll have to do it all over again or risk a zerg rush to break the cycle. The whip isn’t received until an hour or two into the game and trust me its long enough to drive you insane.

With only 2 hit points and sparse health upgrades you’ll have to find (I know of only two) this is not an easy ride.  Death visits frequently and continuing places you all the way back at the start, meaning you’ll have to trudge through every sewer to continue where you left off.  The boss fights are incredibly cheap, forcing you to resort to cheap tactics to win.  I feel a password system would have at least made the game tolerable as well as checkpoints but in this case Sunsoft dropped the ball.

Its hard to believe that in spite of the above problems there’s still the kernel of a good game. Whether you have the patience to discover it is totally up to you however.  In my opinion there are better options available such as Crystalis or even Arkista’s Ring.