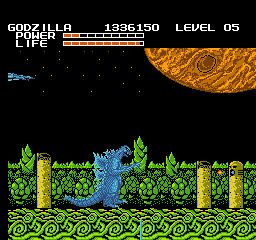 Even after all of these years I still have a soft spot for all of those Godzilla movies I watched growing up in the 80s.  The Godzilla franchise was my first exposure along with many to the Tokusatsu genre of Japanese entertainment.  What Power Rangers represents to a younger generation Godzilla was the same for mine.  We all knew it was incredibly cheesy and eventually figured out that it was a guy in a rubber suit but were able to suspend our disbelief and get wrapped up in the drama.   Godzilla: Monster of Monsters attempts to bring that same brand of action to the NES and succeeds in some respects but fails in others.

Planet X has appeared in our system out of nowhere, only catching the attention of Earth when Neptune and Pluto switch positions in the galaxy.  The inhabitants of Planet X begin their assault on Earth using various giant creatures as the opening salvo.  Godzilla and Mothra team up with the Earthlings to repel the attack.

There are many standout features of Monster of Monsters but the most impressive is the way it manages to capture the scale of Godzilla and the rest of his rogues gallery in the game.   Sprites of this size were not common on the NES and after playing the game it becomes obvious why.  For all of its technical excellence it has a negative impact on the gameplay and combined with a few other factors makes the game a chore to play.

There are two sides to Monster of Monsters.  The overworld map of each planet is presented as a series of hexagonal grids much like a strategy game.  Both Mothra and Godzilla can move a set number of spaces, and the enemy bosses are the same.  Each grid leads to a short action stage determined by the type of terrain represented, although the game interprets these loosely.  The object of each map is to reach the teleporter on the other side of the map to warp to the next planet and the ultimate destination of planet X.

While the game is not a strategy RPG you’ll still have to make tactical decisions.  Mothra can move 4 spaces to Godzilla’s two but it isn’t always a good idea to send her out first.  The boss monsters will flank you and tear you to pieces.  Boss fights last around a minute and your life is not replenished if the same monster or another decides to engage you again.  As you progress to each planet the number of bosses increases by 1, culminating in a royal rumble against 8 on Planet X.  There are some that favor Godzilla while others Mothra will have an advantage against due to their differences in attack power and style.

In the action stages Godzilla comes with a full complement of melee moves ripped from the movies.  Punches, kicks, and a devastating tail swipe will get you through most situations as the famous beast.  Mothra can fly but only has access to a pathetic purple eye beam.  Both monsters have a special attack that consumes a meter that slowly refills; fire breath for Godzilla and wing droppings for Mothra.

The enemies you face are small in stature and are mostly obstructions such as gun turrets and rising fire.  It’s heavily skewed in Mothra’s favor since she can fly but to offset that she is really weak and suffers a drastic knockback when hit.  Outside of the cityscapes surrounding each teleporter the action levels are brief, just long enough to keep you interested while on your way to the bosses.

The graphics are phenomenal, all things considered.  Both Godzilla and Mothra occupy more than a quarter of the screen, adding to the larger than life presentation.  Every level features a layer of parallax scrolling and while there is slowdown occasionally its nothing short of amazing what the developers were able to achieve for a game released in 1988.  The bosses are similarly sized and detailed and true to their movie counterparts.  You can kind of see where they cut corners achieve the game’s look; the majority of the enemies are really small and every planet features the same scrolling skyline with the only difference being the planet in the background.

The repeated backgrounds though are symptoms of a much bigger problem with the game.  As each planet becomes larger you’ll have to slog through many more action stages to complete each level.  The problem is outside of 1 or 2 enemies you’ll see the same repetitive backgrounds and enemies all the time.  While you can get Mothra to the end really quickly Godzila’s low movement range prevents that and you have to get both monsters to the teleporter, which is lame.  In my opinion it would have been a lot better if an action level was permanently cleared once you’ve gone through with one of the pair.

The large size of the sprites works to their advantage in that the game loves to litter the screen with smaller bullets at all times.  Technically you can destroy them but the game’s terrible collision detection works against you.  It’s not outside the realm of possibility to get caught in a chain of hits that lasts 5-6 seconds and there’s a pesky fireball that is hard to dodge that will sap half of your life.  It’s obvious the designers were aware of these flaws as health power-ups drop like candy but if they knew the problems existed they should have fixed them not bandaged them.

It’s a shame that there are so many smaller flaws that mar the overall experience.  With the game’s production values it could have been a contender but instead is a case of style over substance.