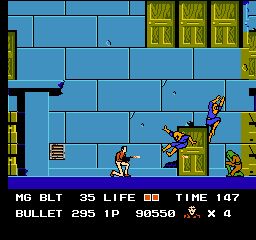 The modern day cover based shooters that the gaming public has fallen in love with all owe a debt to Namco’s Rolling Thunder.  Gears of War, Resident Evil, and hell even Call of Duty to an extent, all share similar gameplay aesthetics, eschewing straight run and gun action for a more tactical approach to combat.  It’s strange to use that word in reference to Rolling Thunder but it’s true.  Rolling Thunder’s focus on stop and go action probably turned off many but for those that were able to adjust to resisting their impulse to run in guns blazing they were rewarded with a good action game that was balls out hard.

Agent Albatross of the WCPO (World Crime Police Organization) is sent on a mission to save fellow agent Leila Blitz from terrorist organization Geldra and foil their plans.  It’s a simple plot made all the more strange by the game’s setting.   The Geldra are supposed to be aliens but they wear hoods like the Ku Klux Klan and the game has a retro 60s Bond look.

Rolling Thunder was released in the arcade by Atari but its NES port has a bit of history behind it.  Namco had fallen out of favor with Nintendo by this point and so were not in a rush to open an American office.  This version of the game was released by Tengen unofficially, hence the giant black cartridge and missing seal of quality.  The whole Tengen/Nintendo saga is worthy of a separate article of its own but needless to say once Tengen lost its legal battle with Nintendo their unlicensed games became rare.

Rolling Thunder resembles Sega’s Shinobi although it predated that game by 2 years.  As Albatross you are equipped with a pistol with limited ammo and your only other weapon throughout the entire game is a machine gun.  Generally speaking ammo is in abundance and you’d have to be a terrible shot to completely waste it all.  The life bar might as well not exist; bumping into enemies cuts it in half while getting shot is instant death.  It’s realistic I guess but you’re going to be so cautious while playing the game that it won’t even register in your mind.  Like Shinobi most of your time is spent ducking behind boxes and other objects while waiting for a chance to attack.  However Rolling Thunder takes it a step further through its clever level design.

Every level is filled with a ton of doors that hold either weapons or extra time.   But their real worth comes from using them as over.  Technically you can hide in any door you find indefinitely although the strict time limit will prevent that.  Using the different doors to hide from pursuers hot on your ass is crucial to survival thanks to the devious enemy placement.  Most levels will always give you two levels you can jump between at any time and so can the Geldra.  You can use this to your advantage and force an unsuspecting to jump after you and blast them in the process but you have to always keep in mind that they can do the same too.

The Geldra come in many colors and each exhibit specific behavioral patterns.  You’ll learn to quickly identify which ones will actually fire back or chuck grenades from the mindless idiots who will simply rush you.  It’s the mixing and matching of different Geldra soldiers that will cause the most deaths as some take up to 3 shots to kill.  It’s not all faux KKK members that you’ll face as there are an assortment of mutants, ravens and other annoying creatures to face.

Needless to say Rolling Thunder is incredibly difficult with most of the trouble stemming from the rigid controls.  Much like Simon Belmont once you perform an action you are locked in, making the platforming sequences a nightmare.  The ability to jump and shoot is sorely missed; to some extent I can see how it might have made certain parts of the game easy but it’s not as if the game isn’t tough enough without it.  At least this version has password saves, making the trip to the end lighter on your free time.

Rolling Thunder is a bit lengthy at 10 levels and is challenging enough that you won’t finish anytime soon.  The control issues bring it down a notch but at its core the game’s central conceit is executed well.   It doesn’t hold a candle to the likes of Contra or Shatterhand but is a relatively nice alternative.