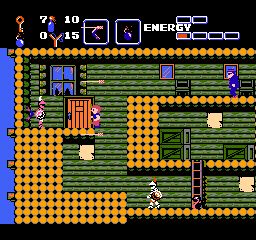 The Goonies was something of a cultural touchstone for many of us who are children of the 80s.  A group of teenagers on the adventure of a lifetime searching for a long lost buried treasure is something most kids dream of in one fashion or another.  Personally while I liked the movie I can’t say that I have any great fondness for it after all this time but back then?  When I found out there was a Goonies II video game I lost my shit.  While I found it strange there was a Goonies II without a Goonies I (it was only released in Japan, the US saw limited distribution through the PlayChoice 10 arcade units) it didn’t stop me from putting an insane amount of hours into the game despite its best attempts to deter me.

Ma Fratelli and her thugs have returned, kidnapping all of the Goonies except Mikey and a mermaid named Annie (what the f*ck?).  I sure as hell don’t remember any mermaids in the movie but whatever.  It’s up to Mikey to save his friends from certain doom in one of the most expansive games released at the time.

Structurally this is similar to Metroid and Zelda II.  You are dropped into the world armed only with a yo-yo and no objective beyond what the instruction manual states.  The ultimate goal of the game is to save the 6 Goonies before you’ll be allowed to rescue Annie.  How you go about that process and the order you do so is largely in your hands.  The game doesn’t give many hints as to what you should be doing but magic locator devices will at least mark where the closest Goonie is stashed away.  If you’re lost at the very least they’ll guide you to the next objective.

Somehow the Fratelli’s have turned the once innocent caves under their house into a labyrinthine death trap full of molten lava, ice structures, and waterfalls.  Add in demons and other mystical creatures and it becomes apparent Konami have strayed far from the source material for gameplay reasons.

This was a fairly ambitious game for the time.  Outside of the various items you’ll collect the world map is divided into a front and back side.  They don’t line up perfectly when flipped so it’s pointless to try to use it as a guide.  The warp zones will teleport you to different areas as well; it’s better to identify each region by its graphic design.  There are minor RPG elements as you’ll collect keys to unlock safes, bombs that can reveal doors and your health will increase with every Goonie rescued.

The initial yo-yo will eventually give way to an inventory full of items.  A boomerang and slingshot will be your ranged weaponry while different bombs in limited supply can reveal hidden entrances.  There are different shoes that increase your speed and jumping distance but the majority of the items you’ll find offer passive effects, such as the helmet protecting you from falling objects or a bulletproof vest that cuts damage in half.  A secondary set of items can only be used in the “adventure” portion of the game and it’s here where the game stumbles.

You’re going to be doing a lot of this.  It gets old really quick.

Throughout every area of the map there are numerous doors that lead to first person segments where you explore a set of room for items and most importantly Goonies.  Most of these areas are fairly small at only a few screens but they make up for it by being the most frustrating element of the game.  The most important items needed to progress in the game are hidden in these rooms but rarely in plain sight.  You’ll have to use every option in your small set of commands in each room to make sure you aren’t missing something.  That means punching all 4 walls plus the ceiling and floor, hitting them with the hammer or using the glasses to reveal invisible objects.  Every time.  There are very few dead end rooms that won’t at least yield some form of item, be it a extra keys or bomb boxes.  You’ll just have to pound every inch of the room to find them.

The random NPCs only espouse nonsensical dialogue, leaving you to your own devices.  There are a few hints provided in safes but there are less than ten of those in the game.  Some of the items are hidden a bit too cleverly.  To find the candle you must punch (!) an old woman five times.  One of the most important, the transceiver is found by punching one of the doors.  Who the hell would actually try that without prior knowledge?  If they removed this portion of the game or replaced it with something better executed it would have been fantastic.  As it is it reminds me of Dr. Chaos too much, a game I absolutely despise.

In spite of the game’s first person adventure mode I still like it, I just wouldn’t recommend tackling it without a guide.  This was released in 1987, a year after Zelda so some of its transgressions such as the lack of any immediate direction can still be forgiven.   The graphics don’t hold up but the soundtrack is still classic Konami all the way, with a surprisingly accurate rendition of Cyndi Lauper’s Goonies theme taking the lead.  The Goonies II is in a middle ground between Zelda’s excellence and Dr. Chaos’ level of frustration.