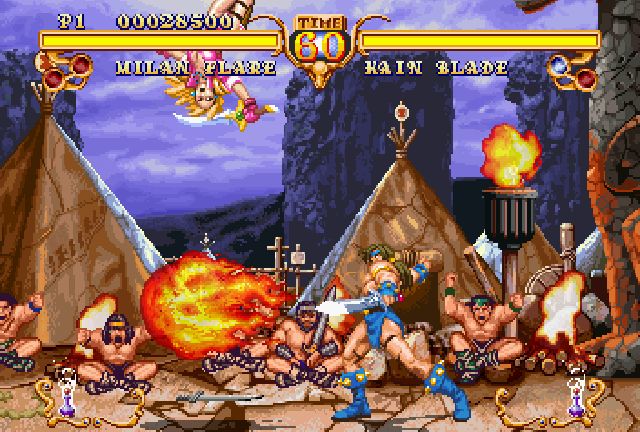 Sure why not?  Everyone else was doing it.  Golden Axe: the Duel is another in the long line of franchises that ditched their original genre and took to the streets to settle their differences.  After the dismal Golden Axe 3 I suppose anything is an improvement.  The Duel is a decent Street Fighter that simply isn’t good enough.  Around the time of its release SNK were firing on all cylinders with the King of Fighters series and their other fighting game franchises, Capcom had unleashed Street Fighter Alpha, and I haven’t even mentioned the 3d fighting games that were emerging.  Sega could easily have ported Revenge of Death Adder to the Saturn rather than creating this decent but derivative fighting game.  Ultimately that is the Duel’s biggest flaw; it tries to cram in so many features from other games that it doesn’t have an identity of its own.

Years have passed since Death Adder threatened the world during his reign of terror.  But just as soon as the memories of those times have passed a magical axe is discovered, sparking a new war for its power.  With the promise that this new Golden Axe can grant anything its owner desires 10 combatants step up to see who will ultimately possess the weapon and have their heart’s desire granted.

Thematically and stylistically the Duel resembles Samurai Shodown on more than one front.  It features the same scaling technique when fighters are further apart, it’s primarily a weapons based fighter, and some of the roster wouldn’t look out of place in SNK’s slasher, most notably Green and Jamm.  I don’t fault Sega from patterning the game after such a bonafide classic.  Samurai Shodown practically revolutionized the genre with its weapons based combat and slightly historical roster.  The similarities end there however.

Although you don’t get to choose any of the familiar Golden Axe heroes their descendants have picked up the slack.  Kain Blade takes after Stern Blade and is analogous to Ryu and Ken.  Milan Flare is a lot like Chun Li and the rest of the cast falls into some of the same tropes.  Having said that there are a few that have a unique play style such as Keel and Zoma with their magic. There are a few that are call backs to some of the popular enemies from the series; Panchos resembles the hulking twin bosses in the first stage of the original Golden Axe and Death Adder is…Death Adder.  It’s not as though the series had a long line of memorable characters to draw from so in that respect I think Sega did a good job of creating a cast that fits within the Golden Axe universe.

With the same familiar six button setup if you’ve played nearly any fighting game over the last decade or two you can jump right in.   Although the controls are responsive the combat doesn’t have the necessary “flow” that you would expect from a top tier title.  Stringing together a series of well-timed blows to form combos feels more like an accident than natural result of the combat system.  The game’s slow speed is the culprit in my opinion.  The original arcade release came in late 1994, still a year or two away from the manic Vs. series.  But even taking that into consideration you have to remember the 16-bit renditions of Street Fighter 2 Turbo and Super Street Fighter offered various speed settings and accommodated gamers of all stripes.  The few speed settings available do little to make combat feel fluid with the game still maintaining the same lethargic pace.  The computer’s AI can be cheap at times but nothing that will result in controller throwing rage.

The game’s sole original feature is a nod to the series roots.  The sneaky little elves that would steal your items between levels make an appearance throughout each match.  By kicking them they drop potions or meat to restore life. Collecting five potions allows you to power up and dole out massive damage and activate your super move.  The elves are a constant presence so that either you or the computer can take advantage of this feature with regularity.  A well-timed power boost can snatch victory from the jaws of defeat but the same applies to the AI.

Despite this The Duel is amazingly light on options.  There’s only the standard arcade mode and a versus mode to beat up on your friends.  Even in 1996 this was spartan.  Tekken 2 was released the same year with a ton of extra characters, an extended practice section and numerous versus modes.  With no hidden characters, artwork or any other unlockables the game is only interesting for an hour or two before you’ve seen all it has to offer.

The game’s content (or lack of) is disappointing but the visuals aren’t.  These are some of the largest 2d sprites from that era and each are exquisitely animated.  The backgrounds are excellently drawn and feature some minor bits of fan service for those looking closely.  The special effects when performing super moves are the game’s graphical highlight.  What isn’t are the ugly pixelated closeups when the game decides to zoom in to better capture the action.

Golden Axe the Duel was originally released in the arcade like Return of Death Adder so there was the possibility of a perfect conversion of that gem.  Why Sega chose to convert this ho hum fighting game that lacked the features and graphics of its competition at the time (Street Fighter Alpha & King of Fighter’s ’95) we’ll never know but it stings knowing there was a far superior game begging for a home port.