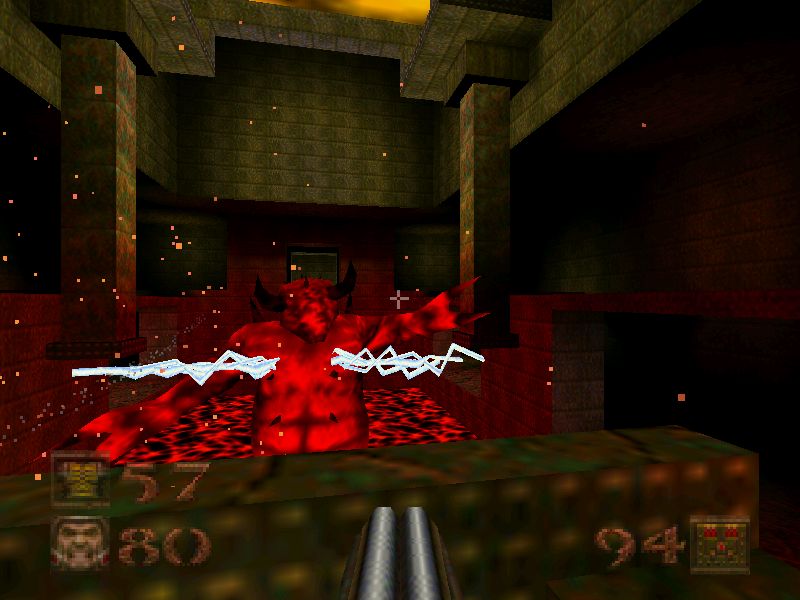 Remember when first person shooters were new and exciting?  Obviously we’ve come a long way from the heady days of Doom and while I won’t say they’ve ruined the industry (because it’s not true) no one can deny that there are far too many generic FPS on the market.  But it wasn’t always this way. There was a time where every new first person shooter brought something new to the table, from Hexen to Duke Nukem.  While everyone else struggled to reach the same level of authenticity as Doom Id Software would take the bold first step in bringing the genre forward with Quake.

Slipgate technology has allowed humanity to finally teleport to different locations around the world and even to other dimensions. Unfortunately our technology has been used against us as demons from an unknown dimension have begun to invade Earth.  As the sole survivor of Operation Counterstrike it is now your job to take the fight to them using the slipgates.

Although similar in its premise Quake held a number of distinctions over Doom.  It was the first FPS to use fully polygonal models for everything, from environments to enemies.  It popularized the concept of fan created mods and it took the addictive multiplayer of Doom to the next level with up to 32 players competing through Quakeworld.  The Quake engine would prove so versatile that there are many games to this day that still use some variation of its technology (the Call of Duty series for one).

The initial software rendered release allowed the game to reach a wide range of PC configurations but it was the 3d accelerated GLQuake that truly put the game on the map with its colored lighting and advanced filtering.  It is this version of Quake that was ported to the N64 by Midway, who has done an admirable job of squeezing what would normally take a $1500 PC (at the time) into a cartridge.  For those like me who were too poor to afford a PC it was the next best thing and is still enjoyable today.

The objective of every level outside of boss fights is the same: find the keys needed to unlock doors and survive to the end of the stage.  Quake is broken up into 4 Episodes of 8 levels each; this version is missing six of those.  Also removed is the choice of Episode at the start which is a huge blow.  It was nice having the freedom to tackle a different set of levels if a particular episode gave you trouble.  Now that you have to go through the game sequentially if you’re stuck, you’re stuck.

The two factors that set Quake apart from Doom were its weapons and enemies.  There’s quite a selection of implements of destruction on offer and aside from the standard shotgun they all feel satisfying to use.  The double barreled shotgun has the perfect balance of power and spread with its ability to knock some of the stronger enemies on their ass if used in close.  Shotgun is the most plentiful basically making it the new default weapon once acquired.  The nail gun has less power but makes up for it in terms of rate of fire.  I imagine the developers realized how overpowered it is so they’re a bit stingy with its ammo.

That would prove to be a wise choice as the Super nail gun has twice the power but will run through the full allotment of ammo in double the time if you don’t let go of the button.  My personal favorite is the grenade launcher.  Grenades in Quake will explode on impact or a few seconds later if they don’t hit a target.  There best quality however is that they can be bounced off walls.  You can eliminate many enemies without being in the same room by exploiting this feature, a strategy that is almost mandatory in later episodes.  The Rocket Launcher has the range that grenades lack but lack their versatility.  You can also kill yourself pretty easily due to its damage radius if used in close. The Lightning gun is the Quake equivalent of the BFG but is even rarer.  The few times you come across one generally shit is about to get real, necessitating its power.

There’s a great balance among all of the weapons and circumstances can and will dictate their uses.  Every enemy is weak against a particular one, making your life easier in the process.  By limiting ammo ID has managed to keep all of your armaments relevant to an extent provided you have decent aim.  If you somehow managed to exhaust all of your weapons and have to rely on the axe you might as well reload at that point.

Quake sports a terrifying menagerie of creatures to contend with, all of whom are frightening in their own way.  Knights usually attack in groups and go down fast but are placed in areas where they can ambush you before being spotted.  Ogres are encountered early on but remain one of the most dangerous until the end of the game.  Armed with a chainsaw for close quarters the real threat is their grenade launcher.  Ogres can bounce their grenades off walls just like you and will do so with lethal accuracy.  Entering a room with numerous floors occupied by ogres is a confounding experience since there are few safe areas they won’t be able to reach you.

The more powerful enemies are introduced at a decent clip.  Death Knights are more resilient than their normal brethren but also cause the most infighting due to the wide berth of their ranged attack.  Fiends are melee only threats that can leap so far that running away isn’t a surefire answer to avoiding them.  The Shambler is a pants shitting monster of a beast that is not only sturdy but fires lightning that is hard to avoid.

Quake manages to create a palpable feeling of dread not just through its enemy encounters but due to its fantastic sound design.  The N64 version has a muted soundtrack and relies on the sounds of the creatures more and it’s highly effective.  Every monster has a distinct grunt or shriek announcing their presence long before you see them.  You know that there’s an ogre around that corner by the sound of its chainsaw.  Scrags are terrifying despite their size since they are usually tucked away in a corner you can’t see and can follow you into tight spaces.  Flipping a switch becomes a harrowing ordeal; you just know something will appear but it’s scary not knowing who or where.  When enemies such as Vore’s and Enforcers are introduced in packs later on all the weaponry in the world won’t seem enough.

Despite the variety in its enemies and weapons Quake does become repetitive.  Finding keys quickly becomes old no matter how well thought out the level design.  There are only two boss encounters in the game that sadly hint at the greater amount of depth the game could have offered in their mechanics.  Id wanted to offer action RPG elements to spice up the combat and while they were scrapped some elements of that still exist in the form of items such as the different armor classes, the ring of power and quad damage although they are rare.

These items play a heavier role in the game’s multiplayer which is sadly lacking.  Even at the time of its release Quake 64’s split screen multiplayer was limiting.  Most N64 shooters all offered 4 player deathmatches by 1998 as well as a host of options with Goldeneye setting the standard.  Quake was a much better multiplayer game than single player so it’s sad that they couldn’t replicate that better for its console debut.

Midway did an overall fantastic job recreating the look of GLQuake’s graphics, a feat most probably assumed impossible.  The resolution is lower and the textures are blurrier but it maintains the look admirably.  The framerate is generally high, only dipping in the most hectic situations.  Although the environment based lighting is absent the colored lighting used in its place lends to the game’s atmosphere perfectly.Very few console first person shooters could claim this level of fidelity at the time and the fact that Midway not only replicated the feel of the game but most of its graphical charm is commendable.  The only technical hitch would be the long load times in between levels.  Never mind the fact that cartridges shouldn’t load, it takes anywhere between 20-30 seconds for the levels to load.  I guess something had to give in the end.

I loved Quake 64 back in the day and I still like it now.  The game’s single player mode won’t win any awards but if you like tension few games do it better.  In spite of its downgrades it replicates the advanced PC version spectacularly well.