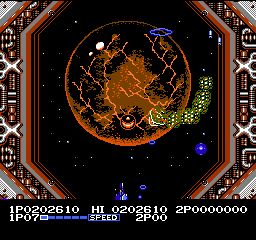 After the success of Gradius a sequel was bound to appear.  You don’t create such an awesome power-up system just to use it one game, no sir.  While Gradius 2 did eventually appear for the majority of us in North America we mistakenly assumed Life Force was that sequel.  However despite the similarities it was from a different series.

Life Force was released for America in 1987.  A port of the arcade game, the NES version differs from its arcade big brother plot wise.  Rather than an alien invasion the game supposedly takes place inside an organic life form, hence the title.  Many of the game’s graphics were also altered to fit the theme, among other changes.  Regardless, Life Force is a noticeable step forward for the venerable Gradius series with many sorely missed features added for a more complete experience.

Across six stages of alternating horizontal and vertical shooting you fight your way through the internal organs of the life form.  Now however you can do so in 2-player coop.  The addition of a second pilot helps to ease the burden as the game has the same level of challenge as Gradius.  Don’t let the meager stage count fool you; you will have to fight for every inch, although if you are weak sauce you can rely on the Konami code.  The addition of coop seems deliberate; there are many double paths that encourage players to split up only to reconvene at the end.  Who will take the shitty path?  It brings out some of the best cooperative moments.

The familiar Gradius style power-up system returns, and for its console port they made some changes.  Salamander in the arcade featured an automatic power-up system, removing the option of personal choice; you can once again pick and choose the weapons you want, when you want.  New to the game is the addition of the Ripple, which replaces the sucky double shot.  Once again if you are playing coop it becomes a fight for power-ups since the number does not increase to compensate.  You find out how much of a bastard your friends are during these heated moments.  One of the biggest changes are the checkpoints; there are none, you respawn almost immediately.  For anyone that has suffered the humility of respawning in the middle of the level with just the standard pea shooter, this is a godsend.

Some of the better features from the Japanese version were removed for no reason unfortunately.  There are no multiple endings, you can only have 2 options instead of 3, and it’s debatable whether the thematic change works.  But those are minor complaints in the face of such a well conceived package.

Small faults aside Life Force is one of the top shooters for the NES, especially the US considering we did not receive some of the more visually incredible ones like Recca and Crisis Zone.  It’s a bit short and hard but is infinitely replayable curiously.  The graphics and sound were a huge leap over Gradius and even slowdown is at a bare minimum.  Sequel or spinoff, it doesn’t matter in the end as Life Force remains just as playable 20 years later.