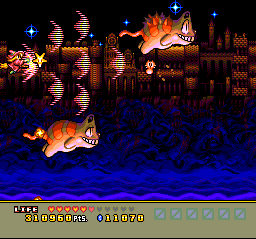 There are games that, due to their scarcity, become highly coveted by gamers and collectors. A variety of factors can lead to this such as the publisher going out of business, low retail shipments and such.  In the case of Magical Chase it was released at the very end of the Turbo Grafx-16’s life.  As such it commands exorbitantly high prices (in the hundreds of dollars!), and I’ll be honest, no game is worth that much.  But when judged separately from its rare status and on its own merits is it a good game?

For the longest time I wrongly assumed Magical Chase was part of the long running Cotton series due to the shared witch aesthetic.  Ripple is a student of magic who has unfortunately unleashed a horde of monster by opening the book Sleeping demons.  In an effort to save face and avoid punishment she sets off with her companions Topsy and Turvy to stop them all.  Cotton and Magical Chase are eerily similar however there are enough differences to avoid being labeled as a clone.  While it isn’t worth the massive stacks of cash it goes for Magical Chase is one of the most enjoyable shmups on the system due to its well balanced action.

Across 6 levels you control Ripple and her two assistants as they battle demons across highly colorful landscapes.  Each level has a specific theme such as forest or castle that will also inform the enemies you’ll face.  Your primary attack is accentuated by your two “options”.  By default they will fire in the direction you move but can be locked into position for defense or if a pesky enemy attacks from behind.  Defeated enemies drop colored gemstones that serve as the game’s currency.  Each level has a mid boss and final boss that are preceded by a shop where you will buy power-ups.

Magical Chase has a robust selection of weapons that expands all the way until the end of the game.  Each level usually has one or two new weapons that could possibly be useful for the dangers ahead however it’s not as if you are screwed if you have a favorite.  In addition, extra lives, health, and boosters for Topsy and Turvy are available.  You can keep a stock of 5 power-ups for later use.

I don’t know if it’s the presence of a life bar or that the shops appear at just the right moment but either way Magical Chase is a joy to play.  Adjusting to positioning your two options takes time but with practice you’ll become quite adept at using them to intercept bullets in a heartbeat.  Currency is in heavy supply so in most cases you can buy everything you want in the shops.  That’s not to say it’s easy though.  The game puts up a fair challenge and by the later levels will thoroughly kick your ass.   But never in such a way that its feels cheap.

The levels are paced in such a way that the shops appear exactly when needed with the exception of levels 3 and 6, which only have 1.  The boss patterns steadily become more complex the further you progress like it should in any good game.  When you die you generally know it’s your fault and what could have been done differently.

With 6 levels you’ll finish it in a few hours with some persistence but I can guarantee you’ll enjoy every moment of it.  It is a shame that such an enjoyable game is so hard to find at a decent price however if you do I urge you to go for it.