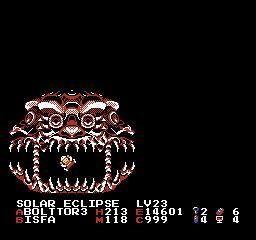 Culture Brain was always a strange publisher that no one knew what to make of.  Most active during the NES & SNES era they never quite managed to create an intellectual property that people would associate them with.  By that I mean a Mario Brothers, a Mega Man, a Castlevania, etc.,  a series that immediately comes to mind when you hear the name Capcom or Konami.  The closest they came would be the Baseball Simulator 1.000 series or Little Ninja Brothers.

A lot of their output in America blended RPG elements with action platforming, a combination that doesn’t always seem to work.  Their games weren’t bad, just not exceptional when compared to their contemporaries.  Which makes it all the more surprising that they released what is probably my favorite NES game of all time, the Magic of Scheherazade.

Mind you I had never even heard of the game when I played it in 1991.  Most video game marketing from back in those days tends to blend together in my mind but I’m pretty sure there was little to none for this gem.  In fact I came in contact with it by chance.  Growing up I was something of a savant when it came to video games, to the point I became the go to guy if anyone needed help in a game.  Can’t finish Zelda?  I’m your guy.  Need help with Metroid?  I got you covered.  How does that relate to this game?  Magic of Sheherezade had made the rounds among my group of friends with everyone lost as to what to make of it.  With my reputation it eventually fell in my hands almost as if it were destined.  Cheesy, I know.

You are the unnamed hero who tried to defend Arabia from the wizard Sabaron and failed prior to the start of the game.  Your memories have been erased, your powers taken away, and your girlfriend the Princess Scheherazade, the King, and her 3 sisters kidnapped.  Tough break.  Along with the Time spirit Coronya your job is to rescue royal family and defeat Sabaron.  Standard stuff for the time, but the game was so groundbreaking in numerous departments I’m amazed it isn’t more popular.  The amount of depth to the game is absolutely staggering; I can’t believe the amount of features the game is packed with.

The majority of the game takes place on an overworld map much like the Legend of Zelda except with better graphics.  You wield either a rod or sword and cast magic as you travel throughout the countryside visiting towns, talking to villagers, and clearing the occasional dungeon when the game calls for it.  You have a choice of 3 classes which can be changed at Mosques: fighter, magician, and saint.  Each comes with restrictions that directly impact gameplay.  The fighter makes the best use of swords but attacks slowly with rods.  Later swords will fire projectiles and reflect enemy bullets.  The magician is terrible with swords; they resemble a dagger in his hands but can attack as many as 4-6 times at once with a rod.  It’s always best to use this class to fight the bosses of each chapter.  The saint is terrible with weapons but can reflect projectiles with a shield and cross the numerous level hazards without taking damage.

The distinctions extend to more than just weapons.  Fighters and Saints get the best discounts from merchants but the Saint is not allowed to gamble at Casinos.  You’ll need to be a certain class to recruit some of your allies and plot elements will force you to change class to progress.  While the majority of your progress is taken up in the overhead sections, you will run into random turn based battles at every turn.

This was the first game I came across that mixed action RPG gameplay with turn based battles and it’s something I wish were more prevalent.  The depth in these parts of the game is ridiculous. Enemies can attack in groups of up to 8 at once to your party of 3 .  The only game for the time that passed this number was Final Fantasy, which wouldn’t see our shores until the following year.  You can choose up to 2 allies to assist you and distribute healing items evenly prior to attacking.  In addition, you can hire troopers to fight alongside you in battle up to a maximum of 99 but only 4 will fight at a time.  All attacks hit them first, and while they don’t level per se, they do get stronger alongside you.  The enemies will sometimes come in specially named squads that allow them to perform combination magic that can decimate your party in 1 turn.