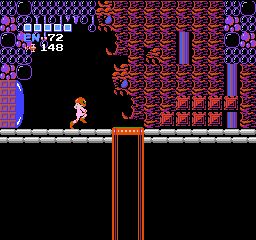 These days any game that has an open world that allows you to collect items and pass previously insurmountable obstacles is referred to as a Metroid clone.  But back in 1986 no such distinction existed.  The only thing we were aware of is that this was unlike anything we had played before and that we wanted more.

Metroid was released in 1987 for the US, among the second wave of Nintendo’s games for the NES.  Space Pirates have attacked the Galactic Federation and stolen samples of the Metroid creatures, organisms able to drain the life energy from anything they touch.  Wanting to stop their nefarious plans, the Federation sends in bounty hunter Samus Aran to their base of operations on Planet Zebes.  A mix of Mario’s platforming and Zelda’s open world structure, Metroid was unlike anything released prior and dazzled gamers with its ominous alien world and escalating sense of scale that would inspire many games to come, such as Cave Story or the Divide: Enemies Within.

Upon landing on Zebes the first thing that strikes you is the choice of 2 directions to go.  This is deliberate; from the onset the developers are letting you know how you approach the adventure is up to you.  Another clever hook, by going right first you will eventually run into a wall you can’t pass, forcing you to go back and explore the other side, eventually finding the Maru Maru ball.  This is to clue you into one of the most important facets of the game; making mental notes to go back to particular areas once you’ve found new power-ups.  In the first few screens alone you’ll see many areas that are out of your reach.  This is intentional.  This sort of invisible tutorial about the mechanics of the game is subtle but effective, much like the Legend of Zelda. When all else fails and you see no other way to proceed you know to come back once you’ve found a new weapon.

The weapons you find scattered around Zebes upgrade your meager starting weaponry, if you can call a 5 foot pea shooter a weapon.  Energy Tanks expand your life bar, missiles are powerful tools that eliminate most enemies in one shot and blast open doors, the Long Beam relieves your need to get up close and personal, etc.  Nearly every single one has a secondary use outside of the obvious; the Ice Beam conveniently turns every enemy into a possible stepping stone, and bombs, although they can kill enemies, find the most use discovering hidden passages, which the game is overflowing with for example.

The beauty of your ever increasing arsenal is that they afford you the option of reaching new areas in a number of different ways.  Most situations are never so cut and dry that they have only one solution; there are many instances where you can “sequence break” the game and get upgrades earlier than anticipated.   Even that is a misnomer because the game doesn’t necessarily tell you if you’re doing things the “right” way.

The games’ freedom in many ways is also its biggest flaw.  Even by NES standards Metroid is massive, maybe even rivaling Zelda in terms of size and but in this case you have no map.  None.  Remembering how or even where that previously unreachable door is can be frustrating, a situation that isn’t helped by the repetitive architecture.  The lack of any kind of direction doesn’t help either; ultimately you have to defeat Mother Brain, but how you reach her is never explained.

Through exploration you’ll eventually find the passageway that will lead to her but first you must defeat her two lieutenants, Kraid and Ridley.  But where are they? The game doesn’t tell you.  You simply have to follow any path you find and hope it leads to them.  It’s disheartening to spend large amounts of time going down deeper corridors only to find it’s a dead end.  I’d wager that a significant portion of gamers who have played Metroid never finished it, not because it’s hard but because they just didn’t know where to go.

Speaking of hard, in complete opposition to the majority of games released Metroid actually becomes easier over time.  You start out pathetically weak and in short order become powerful enough to kill most enemies before they reach you.  By the midpoint of the game (if you can even measure that) you can kill most anything by simply jumping at it.  Energy tanks are in ready supply and there are many convenient respawn points if you can stand the tedium.

It isn’t until the end of the game that you’ll meet your first Metroid and it’s a pants shitting moment.  In stark contrast to the rest of the game these bastards are aggressive in their pursuit and can easily reduce you to a stack of exploding pixels.  The entire game is a massive kick in the teeth compared to the rest of the game; I guess Nintendo remembered that video games are supposed to challenge you in the end.

Often imitated but never really surpassed Metroid is a classic in the industry and with good reason.  Often voted pretty highly on most Best of all time lists Metroid’s issues are symptomatic of the era it was released and as such can at least be forgiven.  In spite of that the game is still fun and if you enjoyed Zelda this is right up your alley.

Yeah I spoiled it so what?  Deal with it!