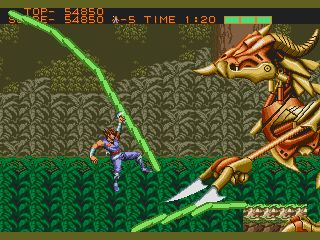 During the 8-bit era gamers were accustomed to gimped arcade ports.  True, there were some that came close or even surpassed their arcade counterpart, usually because the hardware was so dated.  But true arcade perfection remained a dream.  It wasn’t until the advent of the 16-bit consoles that it became a reality, and one of the earliest games that caused a ruckus because of its quality was Strider.

Strider was originally released in the arcade in 1989 and followed by a Genesis port by Sega in 1990.  Set in the distant future, an evil dictator named the Grandmaster rules the world with an iron fist.  The strider organization is opposed to his rule and sends in Hiryu, their youngest and best recruit to put an end to his evil ways.  Praised for its gameplay and graphics porting the game was a monumental task that required the first ever 8-meg cartridge, and with all of that extra space Sega were able to produce a conversion that did its heritage proud and provided an early killer app for their system.

All right first off: Hiryu looks fucking cool.  The standard issue weapon of the Striders, the Cipher not only has a cool effect but makes mincemeat out of enemies.  Befitting the ninja like grace of their organization, Hiryu is incredibly agile and can slide, climb walls, ceilings, and even bosses.  The controls are tight as can be, which is a plus since you’ll need every edge you can get.

Although it’s only comprised of 5 levels each is extremely long and full of classic gaming moments.  Take the first boss, Uroboros, as an example.  You crash in a room with a commander and his troops, who then leap into formation to form the individual sections of his body.  Or how about the rapid descent down the mountain in stage 2, accompanied by accurate physics that increase your speed and jumping distance in order to cross the massive gap at the bottom.  Dying sucks but it’s worth it just to try again and experience it a second time.  One of my personal favorite moments is on the Battleship Balrog, where the lights continually fade in and out, leaving everything a silhouette except the deadly electricity.  No two levels are the same and considering the game’s brevity it does an excellent job of showing you many set pieces.

Despite its brevity Strider is tough. You can only sustain 3 hits before death and powerups aren’t exactly in great supply.  The ones provided are pretty powerful: life extensions, a boost to your cipher’s already large range and helper bots for added firepower.  The difficulty curve is near perfect; despite the many frustrating deaths you’ll suffer it’s almost always fair.  By the last level things become ridiculous but not to the point of absurdity.  Bottom line, you won’t finish this in one sitting.

Strider is an exceptionally pretty game thanks to its art style.  The entire game has a Russian inspired theme, and in combination with the future technology is overall very striking.  The bosses are the highlight but the character animation deserves a mention as well.  The Genesis version mimics the look pretty well, with the only concessions being a reduction in color and some background scrolling.  The sound took a hit, with lower quality music and all of the voice acting removed.  Even despite this the claims of bringing the arcade experience home still rang true.  This was one of the best home ports of its time.

It’s been 20 years and in spite of the perfect conversions since then the Genesis version still remains impressive and most of all fun.  I have no problem recommending it wholeheartedly.