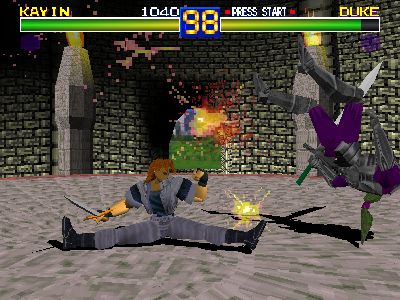 I wonder just how many remember the insane hype among the press for Battle Arena Toshinden.  If you were to base your impressions of the game off what the press at the time had to say Toshinden is one of the greatest games of all time, receiving many near perfect scores.  So in the end did it live up to the lofty expectations fostered by over eager journalists dazzled by its graphics?  Hell no!  I don’t know what the reviewers were smoking but it took less than half an hour to realize Toshinden was crap.

An organization known only as the Secret Society is hosting the Battle Arena Toshinden, a legendary tournament known only to those familiar with the underground.  8 fighters have stepped up to participate with their own reasons for doing so.  Family, honor, glory, everything is on the line as they compete to see who will win.

I made it sound a lot more interesting than it deserves.  Battle Arena Toshinden caused quite a stir when it initially debuted at the very first E3 in 1995.  Up until that point the only 3D fighting game widely known to everyone was Virtua Fighter, and Toshinden virtually obliterated it in terms of presentation.  With the PlayStation as Sony’s first foray into the console wars the buzz generated by Toshinden quickly turned it into a killer app for the system.  The infatuation was short lived however as gamers quickly realized that Battle Arena Toshinden was all flash and very little substance and it stands as one of the most overrated games of all time.

In creating Toshinden Tamsoft clearly drew inspiration from the best.  The 8 fighters fit into a number of niches; Eiji and Kayin are the Ryu and Ken of the game, sharing the same moves and history as rivals.  Ellis is a clear match up for Chun Li, physical weak but makes up for it in speed.  Mondo and his extending spear call to mind Dhalsim.  While they cover most of the bases the rest of the cast don’t fit into any mold and are actually original in their design.  While Run-Go fits the slow strong man profile his special moves make him surprisingly agile.  The elderly Fo employs magic in his attacks and is unpredictable in his movements.  And what fighting game can be called complete without fan service?  Sofia fills that role as an ex KGB agent looking for her lost memory.  Surprisingly Sofia became something of a PlayStation mascot early on but was quickly dropped in favor of Crash Bandicoot.

While Toshinden had a good base to start with in its characters it fighting engine or lack thereof falls completely flat.  There is no sense of weight to the characters so attacks send your opponents flying or out of reach to follow up, severely limiting the combo possibilities.  Like Virtua Fighter jumps are extremely floaty.  A simple combo of a light slash, light slash followed by a Rekuzan for Eiji is a chore to perform and feels slow rather than fast and fluid.

While the fights are mostly constricted to a 2d plane the camera frequently rotates for a cinematic view of the action and will screw up your timing.  Certain special moves, such as Sofia’s Aurora Revolution or Fo’s Mystic Sphere also seem to throw your character off in random directions rather than always facing your opponent.  These issues reduce Toshinden to a button masher and the brain dead AI doesn’t exactly force you to adapt or try to learn deeper strategies.

While the combat is a flop Toshinden did introduce one important innovation to the fighting genre, the side step.  The ability to sidestep or roll to avoid attacks and to attack from behind cannot be stressed enough, especially for 3d fighters.  This move would be iterated upon by many developers, most famously by Namco with the 8-Way run.

One area BAT does not disappoint is its presentation.  In 1995 Virtua Fighter’s flat shaded polygons were still considered a revolutionary step in the fighting genre.  Toshinden seemed to come from another planet in comparison. Toshinden featured fully texture mapped and light sourced character models which were perfect at hiding the PlayStation’s weaknesses.  There are a ton of special effects thrown around, such as the transparency on Ellis’s performing pants or the warping tiles in Gaia’s background.  One minor detail that was mind blowing at the time was the TV screens broadcasting a live version of the current match in Kayin’s stage; quaint by today’s standards but in 1995 was incredible.  The soundtrack is also very good with tunes that match each fighter’s stage and country of origin.

It’s too bad the game becomes boring so fast.  It’s pretty telling that my friends and I played the one level demo of Ridge Racer more than Toshinden at the PS One’s release but Tamsoft were simply ill equipped to back Toshinden’s revolutionary graphics with suitable gameplay.  Much better fighting games were released for the PlayStation shortly after its launch and everyone quickly came to their senses and realized the game was simply no good.  In the end there’s nothing here that warrants closer inspection.