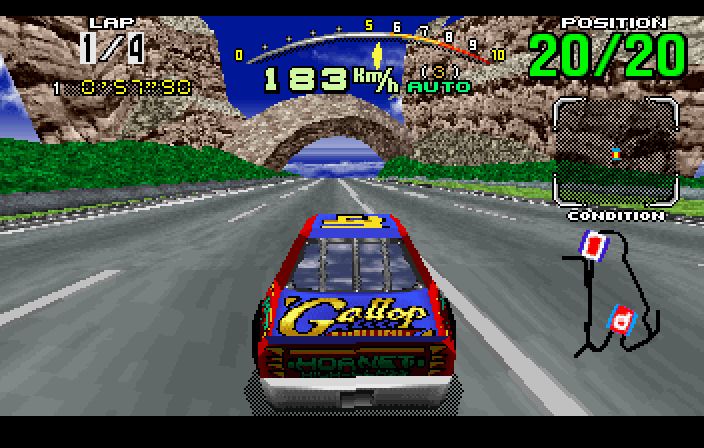 There’s no polite way to say it: the Saturn version of Daytona USA is one of the most disappointing home console ports of all time.  As the 16-bit era waned and magazines were flooded with all kinds of technical details of the upcoming consoles the dream of owning arcade perfect ports of the most famous quarter crunchers was starting to become a reality.  Even considering Sega’s long history in the arcade Daytona USA caused quite a stir as the first game to use Sega’s new Model 2 arcade board.  It would be a tall order for any system to faithfully replicate the game’s graphics but even when taking that into consideration the Saturn version is a massive disappointment.

Released in arcades worldwide in 1994 Daytona USA was a graphical powerhouse, with a full 60 fps and fully texture mapped graphics for a level of detail unheard of for the time.  When compared to Virtua Racing which was released the year prior it might as well have come from another planet.  Beyond the graphics the tight controls and intricate course design made the game a sublime experience for anyone lucky enough to have sampled it.

With the impending launch of the Saturn in Japan Daytona and Virtua Fighter were viewed as the system’s killer apps.  While both games were rushed to meet the system’s release date Virtua Fighter managed to be a more than worthy port outside of a few niggling issues.  Unfortunately Daytona suffered heavily missing most of the arcade game’s graphical flourishes which also affected the gameplay.

The botched graphics were also a sticking point when compared to the PlayStation version of Ridge Racer which by all accounts was near perfect.  Although it didn’t affect Japan as much in the US Daytona and Virtua Fighter’s graphics seemed less than adequate in the face of Battle Arena Toshinden and Ridge Racer, a fact that I’m sure played a role in the PlayStation’s dominance in the US.

Daytona USA was indicative of racing games of the time in terms of content.   You have the choice of 2 cars that offer manual and automatic transmission with some differences in terms of handling and top speed.  The Saturn mode offers 2 more cars and another 6 unlockables based on your performance.  These new cars all feature some mechanic that will benefit you such as higher speed but low grip, better performance on grass or averting slowdown when crashing into walls.  Some would say it’s kind of cheating but considering you’ll have to master the courses available to receive them you more than deserve a little compensation for your trouble.

In terms of handling Daytona sits in the middle between the drifting of most popular arcade games and more complex simulation racers.  You won’t be power sliding around corners but the more punishing aspects of sim games are mostly absent.  Smashing into walls, which will happen frequently at first, will lead to car damage and require a pit stop lest you risk falling too far behind.  All 3 tracks have a varying number of laps and competing cars based on difficulty.  Once you’ve grown accustomed to the nuances of manual or automatic transmission tackling the 3 courses slightly easier.  The track design is marvelous and along with the controls is one of the few aspects this port did right.

All similarities to the arcade stop there however.  The graphics have suffered a massive hit; more than necessary even considering the quirks of the Saturn’s architecture.  The smooth 60fps was downgraded to around 20, with further dips when the screen is crowded.  The overall look is extremely pixelated which is to be expected but makes the claims of pixel perfect conversion on the back of the box laughable.

These downgrades would have been forgivable if not for the atrocious pop-up.  It was common practice in most console games of the time to use fog or clever level design to hide background details fading or “popping” into view due to the low RAM of the consoles.  Daytona doesn’t bother to hide this, with nearly 25% of the track magically appearing before your eyes at times.  This affects the gameplay considerably since you won’t be able to plan ahead at times, and the city track especially becomes near unplayable at points.  This was already a hard game at points but the terrible graphics aren’t doing it any favors.

At this point there’s no reason to revisit Daytona USA, let alone this version.  For its time it was ground breaking but the lack of options and content simply don’t hold up today.  Appreciate it as a necessary step in the evolution of racing games and nothing more.