Amagon NES Game Cartridge
Amagon was released for the NES in 1989. Aicom developed the game and Vic Tokai published it. The game has the player take control of Amagon who is a marine that is stranded on a far off island after the plane he was in crashed. His rescue ship shows up on the island’s opposite side, and he has to cross the island on foot. The final boss in Amagon is based on a monster called Flatwoods monster, which was a supposed alien that was seen near Flatwoods, West Virginia back in 1952 on September 12.
In the game, the player’s mission is to search the dangerous island full of monsters. Gameplay starts the player with just the machine gun with limited ammo to protect themselves from the island’s inhabitants. There are six levels that have various creatures and a boss in every level’s end. When destroying an enemy, sometimes power ups will appear. When the player picks one up, it can give them extra ammo, extra life, extra points, or a mega key. If enough points are collected and the player picks up the mega key, the player will change into Megagon. While in this form, the player is larger, jumps further, and is stronger. Megagon will not be able to use a machine gun, though he can punch, which does 8 times more damage and will have infinite ammo. The transformation starts with mega points. Megagon will have a hit point for every 5,000 points the player scored while playing as Amagon. Every time a monster injures the player, points will be lost. The player can also use a hit point to shoot energy waves from Megagon’s chest. These shots will be broader than shots from a machine gun. They will also do 16 times more damage and has the capability of hitting multiple targets in one blast. Transformation back into normal will happen once all mega points have been drained.
UPC: 0-39471-88502-1
Platform: NES
Players: 1
Condition: Used
Genre: Platformer
Region: NTSC (North America)
Rating: Everyone 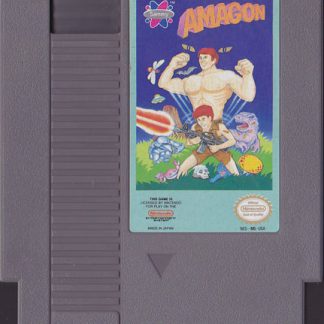