City Connection NES Game Cartridge
City Connection was released for the NES in 1988. It was developed and published by Jaleco. The player will take control of a car that will never stop, being able to do a handbrake turn 180 degrees or jump. The objective is to go through cities and avoid obstacles and paint each part of all the roads. The twelve locations are Japan, China, Holland, India, Egyptian Temples, Sydney, London, Neuschwanstein Castle, Paris, Easter Island, Grand Canyon, and Manhattan. The main character in the game goes on tour to see all roads and sights around the world. To prove he was visited a certain location, the player will drive around the current location and paint all the sections of road white. However, the police will have no tolerance for vandalism.
The roads will change color after the player drives on them, which will show that specific road was painted. The main three obstacles the player will need to avoid are spikes, cats, and police. The police will chase the player and if they come in contact with their car, it will explode into a pile of hearts. A life is lost when this happens. To avoid the police, oil cans can be obtained by the player that are used to have police cars spin out and lose control. The player can then bump them off of the screen. If a cat is run over, the player will lose a life and the cat will leave the screen diagonally with a comical song playing, called Neko Funjatta in Japan. The car will not explode in this situation. The spikes will have the player’s car on contact.
A balloon will occasionally float by in any stage. If the player gets to touch a balloon, they will collect it. Collecting three of these balloons will have a warp activated that will send the player ahead multiple stages and provide a significant amount of bonus points. The city will change as the player travels, but the roads difficulty pattern will stay the same. Although the player can warp, the amount of cities they travel will loop endlessly and is not shortened when a warp is taken. The game is known to have a catchy tune playing in the game’s background when a new city is entered. Even though it will use ethnic variations depending on the destination, it is an adaptation from the classic piece called Allegro non troppo e molto maestoso. The London music in the game is Highway Star from Deep Purple.
UPC: 0-32264-90002-4
Platform: NES
Players: 1-2
Condition: Used
Genre: Platformer
Region: NTSC (North America)
Rating: Everyone 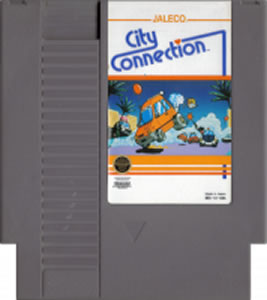