Cybernoid NES Game Cartridge
Cybernoid was released for the NES in 1989. Raffaele Cecco developed the game and Hewson Consultants published it. Studio 12 made the NES game. Some in jokes were put in the game’s title page, with the main joke saying M. Sugden designed the ship, which was a reference to Molly Sugden, a British Actress. The story of the game is about pirates that have raided the Federation’s storage depots and stole ammunition, jewels, minerals, and the most up to date battle weaponry. The ship Cybernoid was dispatched with the instruction to get back the stolen goods and return it within a certain time limit to the storage. To get back the stolen goods, the player will need to battle pirates and their defense systems. It later spawned a sequel called Cybernoid II: The Revenge.
The game is separated into three stages, with every stage consisting of many screens that travel across with the flick screen style of play instead of scrolling. Every screen can have different hazards, with some just having enemy ships that are pirates, some with gun turrets, some with homing missiles, some with indestructible enemies that have fixed paths that will need to be passed over, and some that will have a mixture of all these. The player’s ship can obtain power ups that includes rear guns and a large spiked ball that will fly around their ship for assistance. The ship also has various special weapons that are built in like homing missiles and shields. Shooting the pirate ships will often leave behind jewels or power ups the player can collect.
UPC: 0-21481-10206-9
Platform: NES
Players: 1
Condition: Used
Genre: Shooter
Region: NTSC (North America)
Rating: Everyone 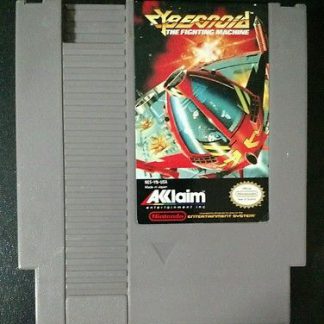