Snake’s Revenge NES Game Cartridge
Snake’s Revenge was released for the NES in 1990. It is the sequel to Metal Gear, though the original creators were not involved. The game takes place three years after Metal Gear, with FOXHOUND finding out a nation that is hostile somewhere in Middle East could have possibly found the original plans for the Metal Gear, trying to secretly build a newer model. Solid Snake, the operative of FOXHOUND that was responsible for destroying the first Metal Gear, was given orders of leading a team of three to the enemy base that will consist of two operatives and himself. The two other operatives are John Turner, who was an ex agent for the Navy Intelligence and an infiltration pro, and Nick Meyer, who is an expert in explosives and weapons that was formerly a marine. The mission codename was called Operation 747.
Like the first game, the player’s goal is infiltrating the enemy base while trying to avoid being detected by surveillance devices or enemy soldiers. To complete the mission, equipment and weapons will need to be collected by the player like firearms, rations, explosives, and card keys for accessing newer areas. If an enemy discovers the player, the game goes into alert mode. This will cause enemies to appear on the screen and start attacking the player. A certain amount of enemies will need to be defeated to go back to infiltration phase. The player can also go to another area or floor to exit alert phase. In specific cases where only one exclamation mark appears above an enemy head and not two, escaping the alert phase can be done just by moving over to another screen.
When starting the game, the player will begin with a handgun and a knife. Pressing A will use the players firearm weapon or explosives and B is for melee attacks with a knife or by punching, depending on which is assigned. The knife will kill guards when in close range, but defeating guards by punching them will sometimes have the guards drop a ration unit or an ammunition box. The maximum health for the player is determined by rank like the first game Metal Gear, with six stars being the highest. Rescuing hostages that are scattered in the areas will eventually promote the player when enough hostages are rescued. Enemy officers that are in specific rooms can be interrogated when the player applies truth gas on them. A successful interrogation will count as a rescued hostage.
The transceiver’s interface has been changed drastically from Metal Gear. Instead of using it to dial frequency numbers, the player will have a list that contains three contacts, which are Jennifer, Nick, and John that he communicates with. A radar will be activated when it detects tracking signals that are being transmitted from a close by area. The transceiver is unavailable while in alert mode.
The game has a variety of areas while progressing like the jungle, the warehouse, the cargo ship, and the train. There are encounters with bosses like usual. Along with the regular top view in some areas, the player now will need to go through some platformer style areas that will play similar to the game Rush ‘n Attack, having Snake proceed by walking, crawling, or jumping while trying to avoid getting detected like normal. The player will be limited to a handgun or the knife while in the platformer areas. Plastic explosives are also available to use for destroying obstacles in the pathway. Some areas will make the player crawl under water in order to progress, which will require the use of oxygen tanks so the player won’t receive damage. Every time the oxygen runs out, another tank is automatically used to refill oxygen until supplies are gone.
UPC: 0-83717-12010-0
Platform: NES
Players: 1
Condition: Used
Genre: Action and Adventure
Region: NTSC (North America)
Rating: Everyone 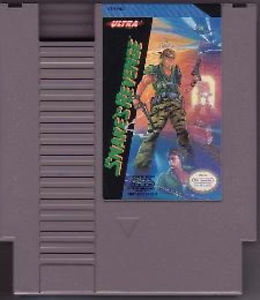