Golgo 13 NES Game Cartridge
Golgo 13: Top Secret Episode was released for the NES in 1988. It was developed and published by Vic Tokai. The game was based from popular manga, and the player takes control of Golgo 13, who is also known to be Duke Togo. He is an assassin with the objective of destroying the Drek group’s leader. Golgo 13 will need to go through many areas which include Athens, East Berlin, and also Alexander Island that is off Antarctica’s coast. The mazes will need to be navigated and shot through in first person to proceed in the game. One maze will be fake and will have no ways out. Mazes will account for the majority of frustration the player will encounter during gameplay. However, the manual will contain maps for all the mazes.
The game is one of the initial NES games that featured graphic violence, drug use, and sex. The release was unusual since NOA had guidelines that were strict and prevented releasing games with that kind of content for the NES. Even though depictions had been toned down and was limited with 8-bit power from the NES, the uncensored content that was released was not clear. Examples are in maze levels in Golgo 13 and one sniper mission on East Berlin, the enemies can be seen bleeding briefly from their heads after being killed, despite prohibition on gore and graphic violence. At the start of the Greece mission, the player will walk right some paces, then walking back towards the level’s beginning. Cigarettes will be seen on the floor. Golgo 13 will be seen smoking once the cigarettes are walked over, restoring the player’s health.
The players energy level will start at 200, with it continuously declining. When enemies are destroyed, the player’s energy will increase and restore bullets. All 13 acts in Golgo 13 are named after classic films. Acts were intended to play out like there were a limit of episodes like in a series on television or like comic book issues. The game will last 52 episodes, giving the player 52 chances for beating the game. The episodes will start at 1 and will count upward on the game’s start screen every time a life is lost by the player. When the 52nd episode comes to an end, the game will reset and start again at the game’s title screen. Said in jargon for video games, it is saying the player will have a max of 52 lives to finish all 13 acts or the game will reset once all lives are gone.
UPC: 0-34912-78451-2
Platform: NES
Players: 1
Condition: Used
Genre: Action and Adventure
Region: NTSC (North America)
Rating: Everyone 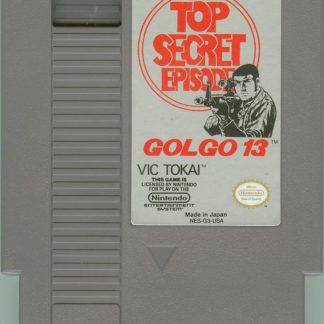