Indiana Jones and the Last Crusade NES Game Cartridge
Indiana Jones and the Last Crusade video game, the version published by Taito, was released in 1991 for the NES, based on the movie. There was also another NES game having the same name, though Ubisoft released this version in 1993 and was totally different than the game made by Taito, but still was based on the movie. Bit mapped pictures of Sean Connery and Harrison Ford are also in the game.&nbsp;
The player takes control of Indiana Jones and play in levels directly taken from the movie, though having a shorter and simpler storyline. It’s the year 1938 and Indiana receives a parcel from Venice in Italy. The parcel had the Grail Diary of his father. Marcus Brody sends him a telegram at the same time about a ship near the coast of Portugal with the Cross of Coronado. You then have the choice to either go to Venice or retrieve the Cross.
If the player chooses to retrieve the cross, Indy will board a ship needing to beat a number of goons before the boss fight. If the player chooses to go to Venice, he is shown a puzzle where he will need to complete before the room gets engulfed in flames from the fire coming from the tunnel. When the puzzle is solved, Indiana is given a sketch of the holy grail, the true one. When you finish the first mission, Sellah will send a telegraph telling Indy that his father, Henry Jones Sr, has been kidnapped by Nazis, being held hostage at the Brunwald Castle, while Marcus has disappeared. After the second mission is complete, another telegraph is sent, this time telling him the Holy Grail’s location.
When going to save Marcus, the player will be on a tank located in Iskenderun, and then Nazis will need to be killed before you go over a cliff with the tank. To find his father, Indy goes to Brunwald Castle and must go through a maze. If certain missions are failed, the Nazis will steal your father’s diary, and then Indy will need to go to Berlin to retrieve it, which will then initiate a sequence with Indy on a motorcycle. The Lost Temple is the last level, and you will need to search the ground to spell Jehovah. A wrong tile stepped on will have it fall and if you take too much time, the torch will go out. After that part of the game, Indy will get to the last sanctum that has the Knight and many grail. If you have the sketch received earlier, it will help you to identify the true grail. If the true grail is chosen, the game is finished and shows the ending.
UPC: 1-01507-72023-8
Platform: NES
Players: 1
Condition: used
Genre: Platformer
Region: NTSC (North America)
Rating: Everyone 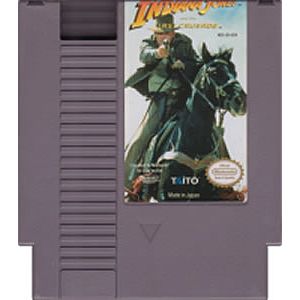 You're viewing: Indiana Jones and the Last Crusade NES $49.99
Add to cart