Legendary Wings NES Game Cartridge
Legendary Wings was released for the NES in 1988 and was originally an arcade game that was released in 1986. It was released exclusively for the NES in North America. The arcade version of the game has been included in some Capcom Classics games and the characters of Legendary Wings have made many cameo appearances in other games. The game takes place in the future when Dark, a supercomputer that has been helping the human race since the ancient times find new states of enlightenment, decided to turn against mankind. Two warriors of young age were given Courage and the Wings of Love from Ares, the God of War. It is up to the warriors to defeat Dark and ensure the survival of mankind.
The game can play two players at once. It will consist of five different areas that have two different ways of playing. The first part in every stage is a perspective from the top view with vertical scrolling. This part has the player flying across the skies while shooting at flying enemies with a gun. They player can also drop bomb on the grounded enemies. The palace will be in the end of the first segment. The player will then need to defeat a guardian at the palace, in which after defeating the guardian, the game will switch to a platformer style gameplay, where the player will walk, crouch, jump, or climb ladders to get to the boss. After defeating the boss inside the palace, the player will return to the flying segment for the nest level. There are two levels that are optional that can be accessed from the vertical scroll segments. The first is a trap where the player has to escape if they get sucked in from a giant face on an area. The second is a bonus level that is hidden, which treasure chests can be obtained to increase the player’s score.
The version on the NES has some noteworthy differences from the arcade version. The basic formula of the game is pretty much the same, some changes have been made for the gameplay, specifically the power up system for the player. The player upgrades their firepower with a P icon like the arcade, having four upgrades of firepower. You will start out with a normal gun, which can be upgraded to the twin laser gun. The next upgrade level will turn the twin laser into the penetration beam. After that, the upgrade will turn the penetration beam into the three way shot. When getting the fourth upgrade, the player will turn into a Turtle Dove, shooting wide shots four times more powerful than the standard gun. Getting hit will downgrade the player one level of firepower. If in Turtle Dove mode, two shots will need to hit the player for the downgrade. The player can obtain continues by collecting hearts in bonus levels, being able to stock a max of nine.
UPC: 0-13388-11006-3
Platform: NES
Players: 1-2
Condition: Used
Genre: Shooter
Region: NTSC (North America)
Rating: Everyone 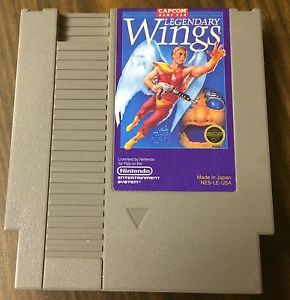