Dick Tracy NES Game Cartridge
Dick Tracy for the NES was released in 1990 and was a tie in for the movie of the same name. This version of the game was released by Bandai and Realtime Associates developed it. The game was more relevant with the comics than the movie. The object of the game was to solve mysteries and not accuse the wrong suspect and to not shoot too many villains that are unarmed.
Every level starts with a mystery to solve along with possible clues. The player will drive Dick Tracy’s car throughout the city to certain locations that are mentioned in your clues while trying to avoid other cars and snipers. When arriving at a location, the game will shift to a platformer game. If the player gets to the correct location, a clue icon will be found that will give more clues for the mystery. Another scenario at the end of a location will be speaking with someone that will give you clues. There will be enemies during the platformer parts of the game. There is also a car chase in every level. When enough clues have been collected, the player can go to the right location where the correct suspect is to arrest him. The game ends if your energy meter runs out or if you abuse your power in a case three times, like interrogating a person that wasn’t involved or arresting a person with little or no evidence.
During the platformer part of the game, Dick Tracy can duck, punch, jump, shoot his pistol, or find better weapons that have limited ammunition. Those better weapons include an automatic Tommy gun and the other being tear gas which will all the enemies on the screen. If an unarmed villain is shot, life energy from your meter will be lost. There are two different ways to refill your health. The first is if you have a 1/2 point in the life meter, the player can go to a police station to recover the other half point. The &nbsp;other way is finding an icon that can be found in certain levels that will be heart shaped. It is used by pressing the B button and Select button simultaneously. Dick Tracy is considered a difficult game to beat since there are no continues or extra lives. There are passwords however to continue at later points in the game.
There are 15 villains from Dick Tracy to avoid or arrest, with each being a suspect in multiple levels. The first level has Breathless Mahoney, Flattop, The Rodent, Steve the Tramp, Numbers, and Shoulders as suspects. The second level has Breathless Mahoney, Lips Manlis, Littleface, The Brow, Influence, and Itchy as suspects. The third level has Flattop, Shoulders, Itchy, Pruneface, The Blank, and Stooge Viller as suspects. The fourth level has The Rodent, Steve the Tramp, Shoulders, Littleface, the Brow, and Influence as suspects. The fifth and final level has Breathless Mahoney, The Rodent, Itchy, Pruneface, The Blank, Stooge Viller, and Big Boy Caprice as suspects, with Caprice making his first and only suspect appearance.
UPC: 0-45557-07270-4
Platform: NES
Players: 1
Condition: Used
Genre: Action and Adventure
Region: NTSC (North America)
Rating: Everyone 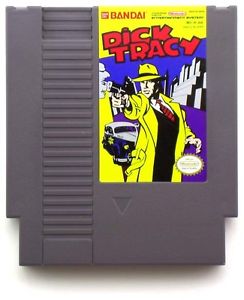