Major League Baseball NES Game Cartridge
Major League Baseball was released in 1988 for the NES. It was one of the first games that was licensed by the MLB, but the MLBPA did not endorse it. Since the Players Association did not back the game, the names of players could not be used, but the numbers could be used, therefore being able to accurately portray the rosters on the teams. The game was the first for the NES to carry the official MLB lineups and licensing. The gameplay had some realism to it and focused on the details of managing, stressing the importance to choose a balanced team. Though the consoles back in this era had limitations, the game was considered three dimensional and Nintendo Power featured the game in it’s first issue comparing the game to other baseball type games of that era.
Since the game was licensed by the MLB, it featured all the teams in 1987 that existed, for a total of 27. The numbers to the players are accurate which make the lineups on the rosters accurate also. Like said before, the Player’s Association for Major League Baseball did not endorse the game, preventing names from being used. The numbers being accurate brought some realism to the game, and the players were represented by abilities, throwing arm, statistics, and the placement of the player in batting order that they were in real life. There are some instances that make the game not as realistic, like the pitcher not being able to move on the mound and the batter only able to move vertically in the batter box and not horizontally.
The game focuses on the player making manager decisions, being able to choose their own team lineups. There were no Sabermetrics stats because of the limitations during the game’s era. The player must instead make decisions that is based on the player’s data like the total amount of home runs and their batting average. The player can also choose what player will be the pinch hitter and what player will be substituting for pitching. A designated hitter can also be chosen. The game did not allow the player to put more than one team member in certain parts on the field that would normally require, therefore making the decision where to put the team members on the field as a part of the gaming experience for strategizing.
The player can choose between three game modes. Teams from both American League and National League can be used for all the modes. The modes are World Series, All-Stars, and regular season games. Playing in World Series mode only have one game each, which makes this not accurate to the real baseball World Series. The teams are in the official uniforms which makes the colors accurate. The player can also make decisions that a normal baseball player can, like pitching out, bunting, stealing bases, or throwing errors.
UPC: 0-23582-05154-3
Platform: NES
Players: 1-2
Condition: Used
Genre: Sports
Region: NTSC (North &nbsp;America)
Rating: Everyone 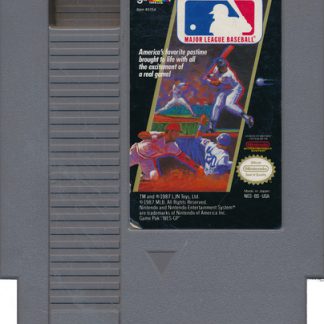