Dr. Jekyll and Mr. Hyde NES Game Cartridge
Dr Jekyll and Mr Hyde was released in 1989 for the NES in North America. Your character switches between Mr Hyde and Dr Jekyll, which is determined by the ability of the player to cause or avoid damage. The story starts with Dr Jekyll going to a wedding for Miss Millicent. While walking to the wedding, many animals, townspeople, and other objects approach him, which causes him to get angry. When his anger level gets high, he is transformed to Mr Hyde, being then transported to a monster world. After killing monsters, his anger will lower and he eventually transforms back as Dr Jekyll. The ending of the game will depend on if you are Hyde or Jekyll before you reach the church.
There are six levels, but are different between the North American and Japanese versions. The North American and Japanese both have the town, cemetery, park, and street levels, but the Japanese has a city and alley level. They also both have a different order the levels appear, with the North American version having two repeating levels due to only a variety of four different types. There were also specific segments and sprites removed in the NA version.
You start our using Dr Jekyll walking to the church, going right on the screen. He can receive damage from obstacles and enemies. As your life meter runs down, your anger meter will go up. The game is over if your life meter reaches empty. If your anger meter fills up, you will transform to Mr Hyde. The day will turn into the night, with monsters also appearing. The level is then mirrored in a vertical fashion and the player can walk left and right, with an autoscrolling screen. The player will need to kill monsters quickly to transform back to Dr Jekyll. The Shepp monsters will give you the most for your meter, with other monsters refilling it slightly.
If any time Mr Hyde gets to the location of Dr Jekyll, not including the last segment, lightning will strike you, killing you instantly. The objective is to get really far with Dr Jekyll and transform back quickly to Mr Hyde. The alternate ending will require you to strategically get to the Church as Mr Hyde but trying to make sure that Dr Jekyll will in front of Mr Hyde upon reaching the last level.
UPC: 0-45557-07100-4
Platform: NES
Players: 1
Condition: Used
Genre: Action and Adventure
Region: NTSC (North America)
Rating: Everyone 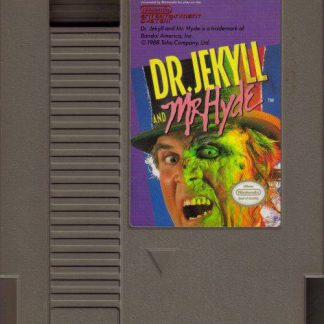